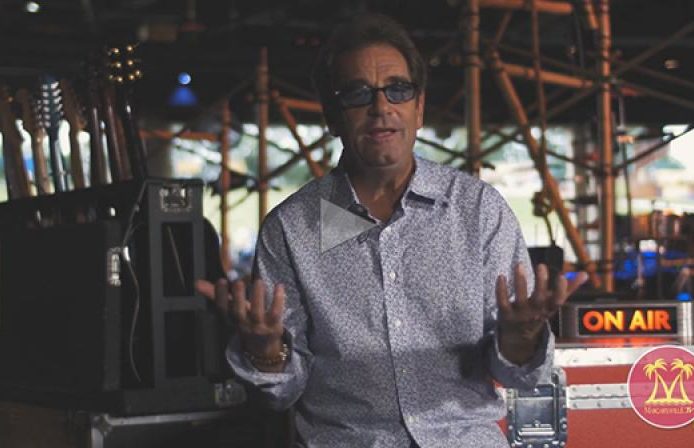 When I was in junior high I had three cassette tapes that followed me everywhere.  Chuck Berry Live Greatest Hits, Jimmy Buffett One Particular Harbor and Huey Lewis and the News Sports.  At the time Huey was my go to for rocking out and I had every tape he made.  Something about the old school rock mixed with soul that made me a fan.  Little did I know our paths would cross in 2015 on a Jimmy Buffett tour.

Those of you following the Workin’ N’ Playin’ Tour know that Huey Lewis and the News were Jimmy’s guest artist this year.  It’s a rare occasion for JB to have an opening artist perform at his concerts.  It takes an artist who has their act together and gets along well with others in order to have the Margaritaville family welcome them.  After one sound check it was obvious that Huey was a pro and that the decision to have him and the News on tour with us was going to be fun.

We were in Frisco, TX when they first joined us.  Huey was on stage with his band sound checking.  He walked the stage with his mic and spoke to the front of house explaining what he was going to do in between a certain song break, “I’ll walk over here, do some schtick and the crew can set up the a capella set.”  When I heard the term schtick I thought of JB and his shameless entertaining urges that have always served him well.  Schtick may be a Yiddish word but it’s showbiz talk for an entertainer that knows how to work a room.  That is something JB and Huey perform masterfully on stage while engaging their fans, making them a part of the show.

That night Huey wanted to let the parrotheads know he understood them.  The Margaritaville state of mind was a place he had visited from time to time and as you know that’s all it takes to get a Fins Up from someone who mentally lives in Margaritaville.  The schtick I referred to earlier turned up during his performance, Huey asked the crowd if anyone had enjoyed a margarita that day, the crowd cheered.  He then asked if anyone had enjoyed more than one margarita that day, the crowd erupted.  He then went on to say he didn’t think that was fair and that he wanted a margarita.  He turned to his production manager off stage, Rick Fanti, and asked for a margarita.  Suddenly a pretty girl walked on stage delivering Huey a margarita in a solo cup.  The crowd went crazy and Huey Lewis and the News had been embraced by the parrotheads.  That’s a genuine and professional performer right there.  As we were preparing for The Bing and Bong Show Jimmy walked from his dressing room and we told him what Huey had done.  Jimmy’s reaction was, “Yes!  He gets it!”

During the tour I had a chance to speak with some of the News about their thoughts being on the road with us.  Everyone said they were having a blast.  They couldn’t believe how nice the band and crew were and they enjoyed the audience.  Huey and his band were especially touched when Jimmy walked out on stage to introduce them to the sold out crowd in Texas.  They didn’t expect that at all and it shows just how genuine JB is knowing what it’s like to play in front of a visitor crowd.  Parrotheads were a new audience for Huey Lewis and the News but he and the band loved seeing everyone know the words to their songs.  Margaritaville TV had a chance to interview Huey and he talks about this here.  For me it was exciting to see an artist and band having a great time with what we see every night.  You get to see it through new eyes and watch them smile looking at all the fun people are having at the tailgate, in the lawn and in their seats.

I made a point to get some of our Margaritaville souvenir blender cups out on the road after I saw that margarita delivery Huey had arranged.  What can I say, shameless entertaining is a subject taught by professor Buffett and I learned from the best of them.  I asked Rick if he’d like to use the blender cups and he said it would be great.  I didn’t want to throw something at Huey without him knowing but wanted to see his reaction the next time he asked for a margarita on stage.  The next time the delivery was made you should have seen Huey’s face.  Somebody understood him!

Jones Beach was a highlight for me because that was the night I got to see how genuine and fun Huey is.  I was at dinner sitting alone at a table backstage when Huey walks up and says, “Mind if I join you?”  Trying to act as cool as possible I said yeah and watched him as he began to eat,  “This catering is fantastic!”, he said as his Rick walked over to the table to go over the set list changes for the night.  Huey talked about moving some songs around and then asked if Rick had arranged for the same margarita glass to be there that night.  I chimed in, “I have Margaritaville blender cups for all the shows you’re with us.  Do you like them?”  Huey said, “There great!  That’s perfect!  I want the margarita to be as big as #$%!”  All I could think was awesome.

We saved the best for last at Alpine.  After a great Bing and Bong Show with Huey as the special guest the show kicked off with something special in mind.  JB was going to have Huey play harmonica on Fins.  Just before Fins I watched Huey pacing backstage as he waited for the intro.  Part nervous and part excitement, Huey walked out to the roar of the crowd while 40,000 fins were in the air.  The song started and all of the News were there watching from backstage with their phones out recording the crowd on video.  If you haven’t been to Alpine Valley you haven’t seen a feeding frenzy like that.  Huey’s band was having as much fun watching it all as Huey did performing next to JB.  It was a great way to end the summer tour.

Huey has said he wished he had more shows booked with JB this year.  He was impressed with the way he and his band were treated and welcomed by JB and the work they saw being done by the Buffett crew.  Maybe we’ll have some more shows together next year but for now we’ll see them New Year’s Eve in Brooklyn at the Barclays Center to kickoff another trip around the sun with JB and the Coral Reefer Band.   You can bet there will be a blender cup on the rider.