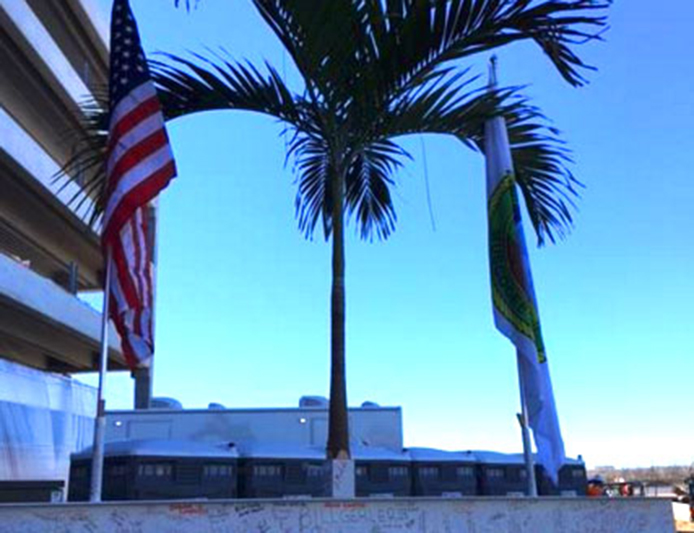 “Palm trees and views I can’t believe, why would I ever want to leave?” –Jimmy Buffett

FIN FACT:
A native tree is often placed on the final beam of the the tallest point on a new structure by builders to show respect for the land. The traditional evergreen tree used in this topping off ceremony at River Spirit was replaced with a locally grown palm tree.

The Margaritaville Restaurant and casino are scheduled to open in September and the 483 room hotel tower will open by the end of the year.

In a topping-off ceremony, builders of tall buildings often choose a native tree to place at the top of a building to show respect for the land.

But with the Margaritaville Restaurant and Casino complex under construction at the site of the River Spirit Casino Resort, the choice of vegetation for Friday’s ceremony was clear — a tropical palm tree.

With Jimmy Buffett’s most famous song playing on speakers, construction workers hoisted the tree on a beam to the top of the hotel tower to mark the completion of the frame for the 27th and final floor of the new addition to the River Spirit Casino Resort.

Muscogee (Creek) Nation Chief James Floyd said he’s impressed by the amount of development the tribe has brought to the area in such a short time.

“I can remember when we had the first bingo parlor here in the ’80s,” he said. “This is a transformational project, not just for the Creek Nation, but for the community.”

The Margaritaville expansion is the biggest development the nation has undertaken in the area by far — $365 million for 1.2 million additional square feet, 483 hotel rooms that will be more than any other facility in the area, and 1,000 additional full-time jobs.

During the topping-out ceremony, officials announced that everything except the hotel tower will be finished Labor Day weekend.

John Cohlan, CEO of Margaritaville, called the local Margaritaville development one of the better-executed Margaritaville projects the company has seen, and the opening is likely to draw the special visitor Parrotheads have been hoping for.

During the ceremony, Tulsa Mayor Dewey Bartlett praised the Creek Nation for their work and their workers.

“The investment they’ve collectively made in Tulsa is pretty incredible,” he said. “But the thousands of people that will be employed after the construction workers leave is really incredible.”

“Your investment will continue to pay dividends throughout the region,” she said.

Pat Crofts, CEO of Muscogee (Creek) Nation Casinos, said the nation knew it needed something attention-getting for an expansion and sought out Margaritaville.

Crofts said he initially met with Cohlan in Las Vegas four years ago, although getting him to agree to Margaritaville in Tulsa took a little effort.

“I started trying convincing him that he should build a Margaritaville in Tulsa,” he said. “The look he gave me wasn’t very good at the time, but we finally convinced his people to come out and take a look. They liked what they saw.”

The centerpiece of the casino-level addition will be a two-level Margaritaville restaurant, bar and retail outlet with a stage for live music, two outdoor decks overlooking the Arkansas River, a seaplane and a volcano that erupts lava into a giant blender.

The riverfront will also sport a tropical-themed pool deck, cabanas, palm trees, fire pits and multiple bars, one of which will have swim-up seating.

Other food venues include a Mickey Mantle’s Steakhouse that is still in discussions, as well as a Margaritaville Coffee Shop.

Ryan Haynie, project director with Manhattan RedStone Construction, said the interior of the addition is being finished out with drywall.

As for the hotel portion, Haynie said the glass skin is up to the 20th floor and should go up to the top within the next six weeks. The large cranes at the top of the tower will come down in the next two to three months.

Finally, the main entrance to the resort will be moved to 83rd Street, and a new parking structure will be built to handle 1,206 vehicles.

Haynie said construction has been going well so far.

“We monitor the weather closely, and things are proceeding smoothly,” he said.

Construction isn’t interfering with the existing casino’s operations, since all the construction is happening behind it. One of the last parts of construction will be to knock down walls and link the old casino to the new.

The older part of Margaritaville finished renovations last year to give its decor a more tropical feel, along with a 5,000-square-foot It’s Five O’ Clock Somewhere bar, the biggest in all of the Margaritaville resorts.

Check out the article at TulsaWorld.com here!