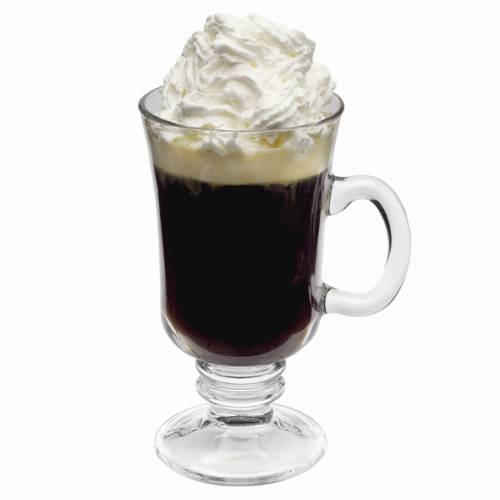 Green is in the air! The second-best holiday in Chicago, Illinois – after a Cubs World Series Win – is good old St. Patrick’s Day. It’s a day when anyone can consider themselves Irish and join their community for a day of celebration, cheer and drinking. With the holiday coming up on March 17, it seemed only fitting that we would take our tour south to enjoy Irish Coffee in Illinois.

The staple to this beverage is Irish whiskey – made in Ireland. It may not surprise you that the word “whiskey” is derived from a Gaelic phrase, meaning “water of life.” There were more than 30 distilleries across Ireland in the 1890s, but that fell to only three in the early 1900s. The bold spirit has been on the rise in popularity again since the late twentieth century. There are currently 16 distilleries operating and more on the horizon.

Irish whiskey has a minimum alcoholic content by volume content of 40% and comes in several forms depending on the type of grains used and the distillation process. You’ll find “single pot still,” “single malt,” “single grain” and “blended” whiskey.

Despite the long life of whiskey, it wasn’t until 1943 that Irish coffee was created in Foynes, Ireland at a flying boat airbase. Poor weather turned around a flight to New York. To help warm up the passengers, Chef Joe Sheridan came up with the warm concoction by mixing coffee with whiskey. A travel writer happened to be one of those passengers. He brought the recipe back to bartender Joel Koeppler at the Buena Vista hotel in San Francisco, making this beverage an international hit.

Although the warm cocktail was created after the great migration of Irish to the United States (1845-1852), Chicago and the Irish go hand-in-hand. Unlike many Irish-rich cities on the East Coast (Boston, New York City, Philadelphia), the Irish were some of the original settlers of Chicago giving them the opportunity to influence the city and its neighborhoods. The Irish heritage of Chicago still runs deep today.

Perhaps the most well-known tradition for St. Patty’s Day in Chicago is dying the Chicago River green. This has been done since 1962 with a secret, environmentally friendly formula. If you haven’t seen it in-person, you can watch the process here.

Party goers can also attend the “South Side” parade – home to much of the Irish community – or the downtown parade. Regardless of where you celebrate, the Irish Coffee will keep you warm, put some hair on your chest and bring you the Luck O’ The Irish!