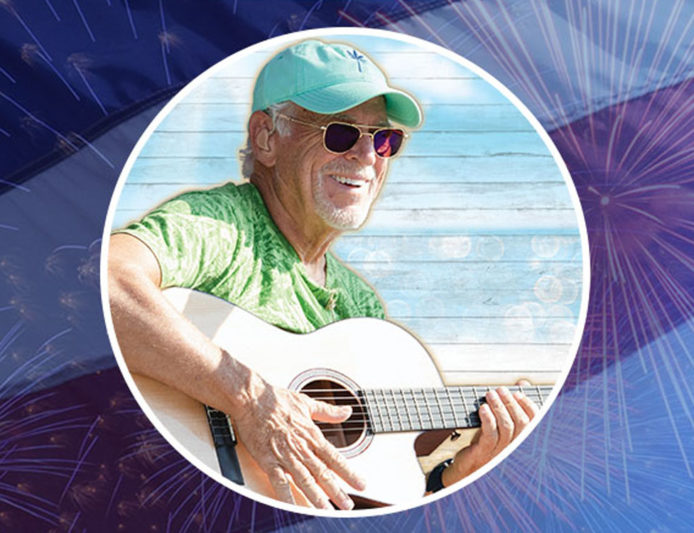 This July 4, PBS’ A CAPITOL FOURTH, America’s Independence Day celebration, will feature the world premiere of multi-platinum selling music legend Jimmy Buffett’s inspired version of the Americana classic, “This Land is Your Land.”  Taped in Southern California overlooking the Pacific Ocean, interwoven with iconic scenes from across the country including the Golden Gate Bridge, the Statue of Liberty and the Grand Canyon, the performance also features Coral Reefer band members Mike Utley on keys and Robert Greenidge on steel drums.  Originally written in 1940 by folk singer Woody Guthrie, “This Land is Your Land” was not recorded until April, 1944 in New York when Guthrie was on shore leave from the Merchant Marines.  In 2002, it became one of 50 recordings chosen that year by the Library of Congress to be added to the National Recording Registry. Buffett previously performed on the 2018 edition of A CAPITOL FOURTH with the Broadway cast of the musical Escape To Margaritaville.

“I have always been a big admirer of Woody Guthrie’s…his simple songs and poignant lyrics,” Buffett remarked. “They were some of the first songs I learned to play. I have been lucky enough to travel this land, and think it is the best song that encapsulates what America means and is.”

“A CAPITOL FOURTH will bring us together showcasing themes of love, hope, unity and patriotism from around our great nation,” said Executive Producer Michael Colbert. “We are thrilled to debut Jimmy Buffett’s stirring new rendition of ‘This Land is Your Land’ during America’s Independence Day celebration on PBS.”

Read more about the broadcast here.

Take a few minutes and get to know one of our Margaritaville University ambassadors! What is your name? Laura Aasen Where do you go to school? I just graduated this spring from Virginia Tech. Go Hokies! What is your major? I graduatedwith a dua

Join in on the island-inspired fun and festivities during the entire month of June  Margaritaville Lake Resort, Lake Conroe | Houston is throwing a birthday bash to mark one year since it officially opened its doors in June of 2020. The first Mar

For spring break this year, my family and I decided to take a little road trip out to Gatlinburg Tennessee...a city that we have passed through multiple times but have never actually stopped and stayed. My family and I love road trips (we’ve visited al