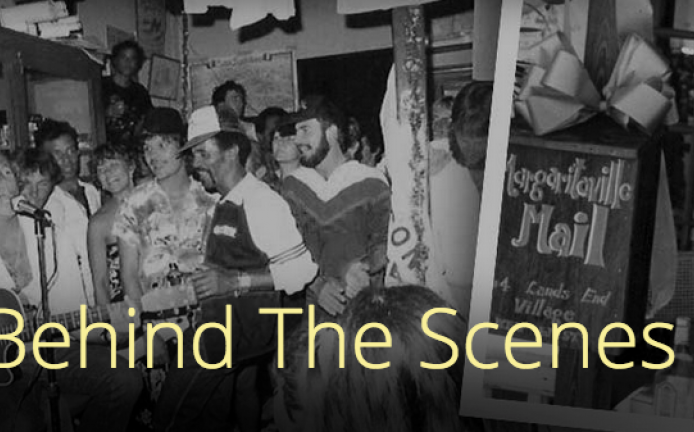 If you’ve checked out Jimmy’s Facebook recently you’ll see a video of him working at his desk talking about his upcoming concert in Key West. It’s a brief tutorial on how Jimmy and the Coral Reefer Band are preparing for this event and in two minutes you get a glimpse of Jimmy explaining the work that goes in to one of his concerts. There’s a little more work to this show because Jimmy is giving his fans a chance to write the set list.

Last year was the inaugural season of Margaritaville.TV and Jimmy was excited by the feedback from everyone who tuned in for the live shows and featured videos from Margaritaville. It was a project that began at rehearsals not knowing if we could make it work but Jimmy, being a creature of creativity, decided we might as well try and see what happens. I think that is the one major factor that keeps Jimmy going, the creative process. He has a work ethic that is driven by creativity. You have to be creative if you plan on touring every year and want your loyal fans to go home happy. Jimmy puts a lot of thought into every tour. He keeps records of set lists from all his shows ,at all cities and when he arrives at the venue the first thing he does is sit down in his dressing room, open his laptop and goes over the songs he plans to play.

In this technological world you have to adapt as an entertainer and Jimmy is one of the best entertainers out there. Keeping records of his set lists is one thing but reading your audience is something that can’t be taught. If you think Peyton Manning calls audibles at the line you haven’t heard Jimmy on monitors. Jimmy will judge the energy level of the audience and if the next song on the list doesn’t match it he will call out the new song to Mike Utley and then the Coral Reefers make their adjustments. We can hear the music in the production office and can tell when he is starting to go “off script” and that’s when you know he’s steering the ship to meet the waves on the water. It’s difficult to describe it but the next time you are at a Buffett show just watch him. He makes all the effort on stage look easy and that is what makes an entertainer a pro.

Jimmy loves to surf, fish and write but there is a tech side to him that rivals his down island mentality. I can remember my first tours with him when he would step out on stage at dress rehearsal and tell everyone not to write about the show on the Internet so fans could be surprised. This was before cameras were on our cell phones. He knew the power of the Internet then and he knows it now. This is how Margaritaville.TV went from idea to reality. It probably started with Jimmy wanting to live stream a show on the International Space Station for astronauts and I suppose his desire to allow scientists in Antarctica to virtually go to Margaritaville led to this crazy idea of live streaming concerts in the first place. Jimmy just wants to share his good time and at the very least reward the Citizens of Margaritaville by allowing them to go to a show if they aren’t near one.

One of the best things Jimmy got out of Margaritaville.TV was the fan discussion. He has made a living at giving his fans what they want and this new platform has allowed them to share what songs they’re enjoying during the show and what songs they’d like to hear. Broadcasting shows has also made Jimmy up his game knowing he is going to have to change the set list more now that some Parrotheads are tuning in to every concert online. I think Jimmy likes the added challenge and it is allowing him to dig into his song catalogue. Those of you who tuned in to Margaritaville.TV last year may have noticed the song changes as the tour travelled across the country. This brings us to the Key West show on April 1 where has given everyone a chance to vote for their favorite songs.

At the big shows Jimmy and the Coral Reefers are inclined to perform the “play or get killed songs”, most fans refer to these as the Songs You Know By Heart songs. Jimmy has always said that if fans keep enjoying particular songs he’s going to keep playing them. The problem is that Jimmy has a great catalogue of songs and if you’re like me you could make a set list without the SYKBH songs. Thanks to Margaritaville.TV Jimmy has found a way to create a special concert with the help of fans by allowing them to vote for the songs they want to hear on the set list. To make things even more fan centered, you can’t buy these tickets. Everyone that sent in a set list gets entered into a lottery. If you don’t win you can still watch the concert live from Key West for free online. Currently all the “play or get killed songs” have received the most votes. Jimmy has found this amusing but it’s a good way for him to see he is giving the fans what they want. Some fans have said they don’t want to hear the hits and I can understand. I’m just happy he is still giving his best effort to keep the creative process going so we all can enjoy Margaritaville in our own way.