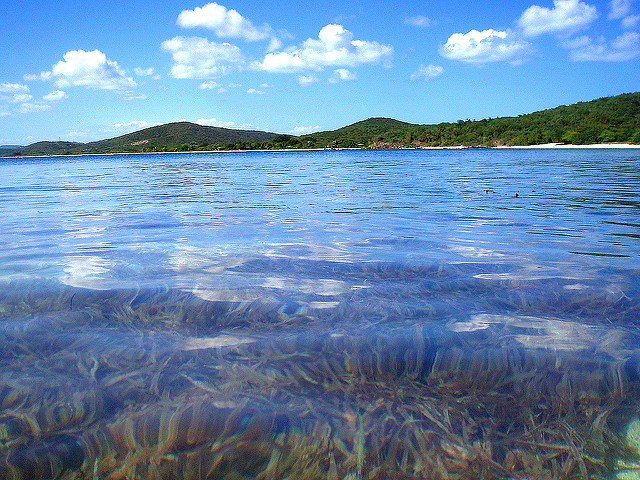 Vieques, a small island just a short ferry ride from Puerto Rico, is so quiet and peaceful that you’ll forget the frenetic pace of your job, your city, or whatever else makes margaritas necessary. But while Viequesis relaxing, it’s also home to some of the most exciting natural wonders the Caribbean has to offer. One of these attractions is Mosquito Bay, Puerto Rico’s largest Bioluminescent Bay. Woah.

That’s right – a Bioluminescent Bay. The sand is warm, the sky is calm, and the water…glows like a star? Say what? We couldn’t believe it ourselves. We thought it was magic, but it’s actually plankton. They glow when disturbed to startle fish and other predators. Some scientists actually call it the “burglar alarm effect” – when they light up, these tiny friends attract even larger predators that eat whoever was threatening them in the first place. That is crazy talk!

Geography also helps this natural wonder along. The bay’s shallow depth and narrow entrance promote the high salinity that the tiny guys need to thrive. Red mangroves grow on the edges of the bay and release vitamin B12, which nourishes them. A splash will create a brilliant neon blue flash that’s visible from miles around. Oh, and don’t let the name deter you. There are no mosquitoes to be found, but if you keep your eyes peeled you just might spot a shooting star or a comet up above. Now that’s something we can get behind.

To get away from the crowds, we recommend you look into kayaking the bay. Every Vieques visitor hears about Mosquito Bay, but very few know about the option to kayak. It’s more intimate than the touristy boat trips, and you’ll be able to take control of your own adventure.

Unexpectedly, the bay went dark in January 2014. Scientists think a wind shift pushed the microorganisms out of the water, but it’s difficult to know what happened for sure. Bummer. Thankfully, the bay brightened again in June (just for us?) Nobody knows how and when this natural wonder will change, but we do know you can see it right now. We don’t want you to miss it!