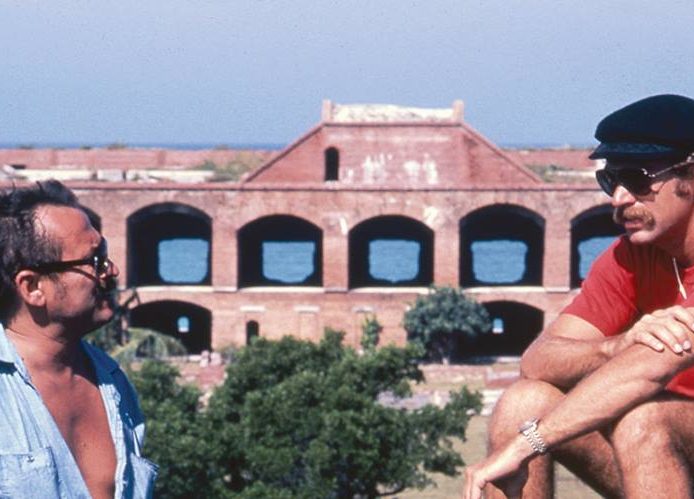 I knew a lot about Jim Harrison before we ever met. He was many things to many different people. But to put it in Michigan terminology, the chassis on which the sum of all his parts rode was the undeniable fact that he was a force of nature.

No, he could not shift tectonic plates or cause tidal waves. But he came pretty damn close.

We met at the end of the road, like so many other nomads who came looking for beginnings or endings, in Key West in 1972. I was a reject from Nashville and he was a published poet from Michigan, which put us just about at equal points on the road to success.

Thomas McGuane, my landlord in those days, not my brother-in-law, introduced us. He and Harrison had been best friends since college. Tom knew, with his gin-clear perception of the world, that we would get along. Tom watches the world, after all, like an osprey on the prowl above the shallow flats of our adopted home of Key West.

After seeing my “Bar singer goes wild on the rebound” routine for a few nights up and down Duval Street, Tom would repeat to me in numerous dinner conversations and bar stool banter, “Wait till you meet Harrison.”

Many generations of misfits have claimed Key West as their town, but I would have to argue that, in the early 70s, it truly was our town.

Jim did not live in Key West back then, but visited on a regular basis, which, of course, was in the spring when the tarpon were running. Finding, hooking, fighting and releasing a 100-pound fish requires a certain skill set and a lot of time on the water. You couldn’t go to the gym to learn how. And to the best of my recollection, nobody I knew in Key West in those days ever came close to a gym — least of all Harrison. We went to the flats not to slay fish, but to play with them in their own backyard.

When I got word from Guy de la Valdene this morning that Jim had died at his desk while he was writing, I was, of course, sad he was gone but glad he went that way.
As Tom put it in a piece he did for The New Yorker, “He was active and creative til the end, but but it was time to go. No one was less suited for assisted living.”
Of course the flashbacks fired up, painting fragments of so many good times and great adventures.

Like the fantasy of us trying to act like we were filmmakers, yet actually producing a documentary called “Tarpon,” which is now a classic among fly fishermen and women. Like the early Livingston days, when Jane and Roxy and I drove across country to spend a summer at the Raw Deal Ranch outside Livingston, and Hollywood this time came calling in the form of “Rancho DeLuxe.” And the West was never the same — at least, Livingston wasn’t. Like the Brautigan period when Richard lived at the Pine Creek cabins next door to Jim, long before they both owned property in Paradise Valley. They would share a bottle and a stove where Harrison once cooked a venison ragout on one burner, while Brautigan boiled his boots in beef broth in a pot on the other burner. (I opted for the stew.) Like the road trip down A1A in a two-seater 1968 MGB with a film crew from a PBS station in Miami following and trying to keep up.

Like the Paris days when we lived like kings in a real castle, with little money, but possessing a big bag of Columbian gold and the key to the wine cellar. Why, you might ask, would sane people allow us to do this? Because they were as crazy as we were and because it was our job. For the price of a plane ticket to Paris, (room and board included), Jim did the narration and I wrote the music for “Tarpon.”
Like New York rendezvous at Elaine’s and JP’s that rarely ever ended before the sun was up. Like Michigan summers when I was playing in Detroit and would escape to his house between gigs up in Lake Leelanau. Like the unforgettable drive across country, just the two of us, in his Ford Cortina, taking turns at the wheel as we crossed the heartland from Montana back to Michigan and sharing our vision of America to each other and the cows we passed along the way.

I have been lucky enough to sing my way across America countless times — first hitchhiking, then in a car, tour bus and multiple airplanes. But my two most inspiring trips were in an airplane with Walter Cronkite and in that goddamn Ford Cortina of Harrison’s.

It was no secret that he loved his success in Hollywood. He loved hanging with stars and starlets and he made enough money in the process to fix up his barn and rent a winter home in Palm Beach, where he would do his “laps” walking the short distance across a long lap pool, with a drink in one hand and a cigarette in the other.

He spent more time in Key West and eventually found his nesting places in Montana and Arizona. He seemed happy in that world but we were all still terrified at his refusal to quit smoking and cut down on his drinking. But that was his choice, and he always knew the consequences. It was his life.

He lived longer than I ever expected him to, so I will take that as a gift. His words will always be with me, like that goofy one-eyed stare that reminded me of Long John Silver. There are plenty of video clips of him in action that I am sure are making their way to YouTube at this very moment. If you get a chance, check some out.

We artists seem to be rediscovered a lot after we leave the planet and that is good for Jim’s kids and grandchildren. They will be provided for, thanks to his amazing work ethic. And more people will know of his work and his view of the world, which was as unique as he was.

After I hung up the phone with Guy yesterday, still trying to come to grips with it, I did what always seems to work for me. I went to the beach and jumped in the water, remembering more things about the days that we had shared together. The water was warm, and there was stiff breeze out of the Southwest and a little rip tide running along the beach. I got my bearings and headed to Southeast, humming a song as I swam.

Barely audible at first but as the waves got higher and the current stronger, I had turned my humming up to “11.” I checked my bearings again to my beach reference point, and figured I had made a good couple of hundred yards to weather. I stopped swimming and just floated back down stream with the current and wind behind me now, smiling and crying and singing the chorus to one of Jim’s and my favorite songs, that I had chimed in on two nights previous in Havana with a half-a-million Cuban kids, when the Rolling Stones let the genie out of the Cuban bottle. The words seem to fit the moment, both for the opening of Cuba and the passing of Jim Harrison.

Jim got what he needed and gave us a whole lot more. Adiòs mi hermano.