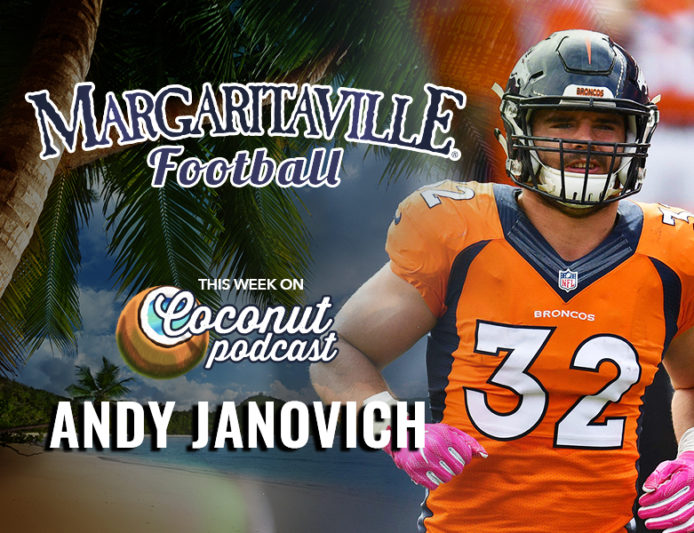 The Real Football Network is escaping to the Margaritaville state of mind for the Coconut Podcast called Margaritaville Football. As Jimmy Buffett’s tour traveled across the country this year, production coordinator Heikki Larsen sat down with football personalities to talk sports, music, living the Margaritaville lifestyle and more. Heikki’s guest this week is Andy Janovich, rookie fullback for the Denver Broncos. Learn more about Heikki’s time with Andy here…

Like cassettes and compact discs, the fullback is a dying breed. With an emphasis on passing and all the rule changes to help with the passing game, fullbacks are being replaced with an extra receiver. These days, it would take a special player to make NFL coaches take notice and think twice about giving up on the fullback position. Former Nebraska Cornhusker Andy Janovich did just that in last year’s draft as the Denver Broncos chose him in the sixth round.

Jano, as he’s called by most, reminds me of the perfect roadie. A good roadie doesn’t complain, they’re accountable and if the artist asks them to do something, they do it the best they can. There’s no seeking the spotlight for a roadie or a fullback. That suits Jano just fine. During the Coconut Podcast interview Andy proclaims, “I’m not looking for anything special, I’m just here to work and be about my day. I’m a pretty simple guy.”

Andy Ketterson, a writer for SB Nation, wrote about Jano after he was drafted by the Denver Broncos. “He’s ready. If you put him in an episode of Naked & Afraid, he’d grab a club, stay naked and the animals would be afraid.” Jano admits he enjoys collisions on the field and maybe that’s why many in Broncos Country have started calling him Andy Manovich thanks to Brandon Perna of That’s Good Broncos!

When I asked about playing fullback he said, “It sounds crazy, just going in there and hitting people, linebackers, iso-blocks, it’s one of my favorite things to do. I’d rather do that than carry a ball for a touchdown.” That said, during the Broncos regular season opener against the Carolina Panthers, Jano got his first official handoff of his NFL career and took it 28 yards to the house. What did he do? Not surprisingly he handed the ball to the referee and jogged over to the sideline like it was another day at the office. He managed to break two of his facemasks in that game by doing what is expected of a fullback…his job. After 11 games this year he had 4 broken facemasks, so now he’s the only player on the Broncos besides the quarterback to have an extra helmet on the sideline in case of a wardrobe malfunction. 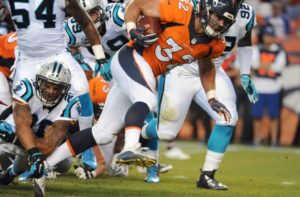 Despite his love of the outdoors, Jano is not a fan of the water. He prefers the countryside and hunting for the times when he wants to get away (proving your Margaritaville can truly be wherever you want it to be). He admits that on his only trip to Florida he saw some murky water outside of Orlando and that was it. I promised him 3 nights at our Margaritaville Hollywood Beach Resort to give him his first introduction to beach life. I have a feeling that will change his water outlook when he sees the Atlantic Ocean for the first time.

Listen to our full conversation here on the Coconut Podcast.