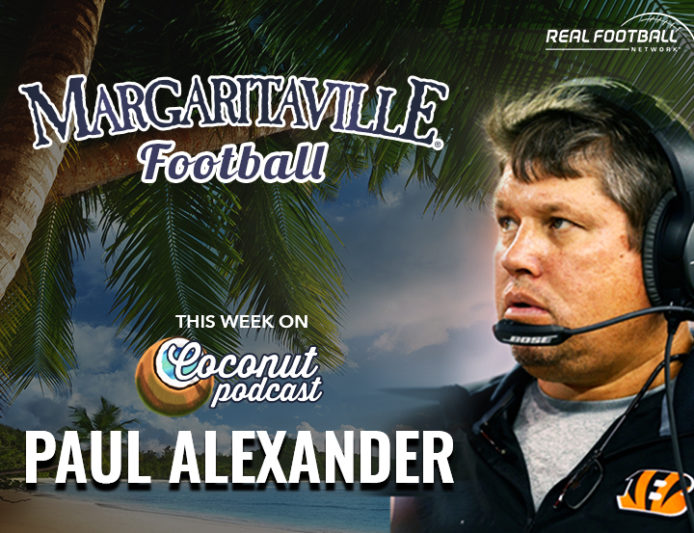 The Real Football Network is escaping to the Margaritaville state of mind for the Coconut Podcast called Margaritaville Football. As Jimmy Buffett’s tour traveled across the country this year, production coordinator Heikki Larsen sat down with football personalities to talk sports, music, living the Margaritaville lifestyle and more. Heikki’s guest this week is Paul Alexander, assistant head coach and offensive line coach for the Cincinnati Bengals. Even though the two spoke before the coach’s first Buffett concert experience, he is no stranger to music and feels it’s key to his coaching style. Heikki tells the story here…

The tour was in Cincinnati and I was walking Coach Paul Alexander and his wife to my tour bus for his interview. Coach A, as he’s called by his players, has been the Cincinnati Bengals offensive line coach since 1994. In 2003, the team added Assistant Head Coach to his title. He returned from a football camp in Illinois that day, just in time for he and his wife’s first Jimmy Buffett concert experience.

Sports Illustrated has called Coach A one of the best offensive line coaches in the NFL. He attributes that praise to luck, also 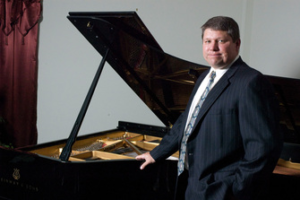 giving credit to the legendary coaches that brought him up the ranks. He says the most important things in a lineman are toughness and intelligence and their work is similar to the Secret Service. You have to protect the President (the quarterback) and the Vice President (the running back)…if you do it right, nobody notices, but if you do it wrong, everyone sees it.

Coach A isn’t your typical football coach. In fact, he could easily be mistaken as a college professor. And not just because he can quote Leonardo Di Vinci, Mozart and Beethoven, but he’s also a concert pianist! He’ll shrug that title off in a self-deprecating way, but he lights up when he starts explaining the similarities between athletic and musical performances. He even wrote a book about it and it’s a great read! 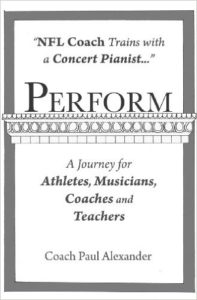 He feels understanding music helps him with his coaching. Once you get to the pros you have to find new and creative ways to teaching, so he takes things from music theory and uses it at practice to help his players retain what they learn. Coach A rarely raises his voice above a speaking level on the practice field because in today’s game players build a wall to yelling and screaming. Instead, he applies the 57 things he’s listed in his book that are comparable between musical and athletic performance and his players enjoy it…see for yourself!

As we discuss the meaning of Margaritaville he talks about how it’s a trigger or a thought to his favorite state of mind. Peace. When he listens to some of his favorite Beethoven sonatas he is at his most peaceful place and that’s his greatest state of mind. As for relaxing beverages, his go to is a tall cup, purchased at a garage sale by his dad, filled with beer and ice because he likes his beer as cold as possible. It seems even coaches have their own tin cup chalice.

Listen to the full interview with Coach A here.