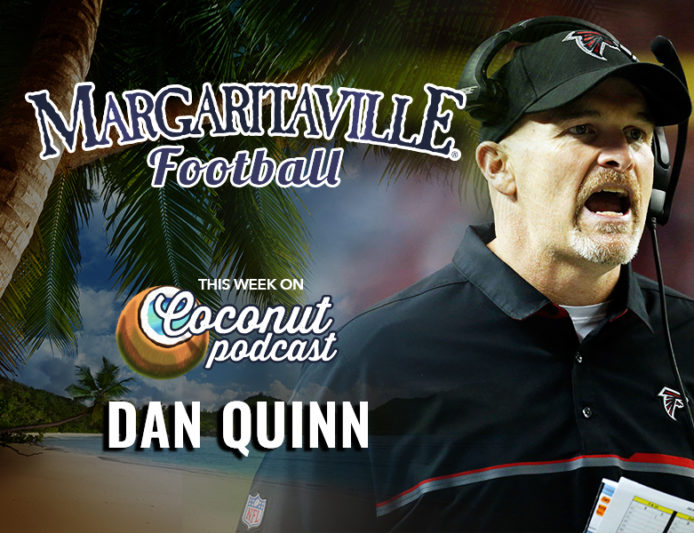 The Real Football Network is escaping to the Margaritaville state of mind for the Coconut Podcast called Margaritaville Football. As Jimmy Buffett’s tour traveled across the country this year, production coordinator Heikki Larsen sat down with football personalities to talk sports, music, living the Margaritaville lifestyle and more. Heikki’s guest this week is Dan Quinn, head coach of the Atlanta Falcons. Go behind the scenes of the podcast with Heikki here…

I arrived at the Atlanta Falcons training facility early in the afternoon with a few notes, but not many. The night before our tour bus broke down and it took some time to get the Jimmy Buffett Crew to Atlanta that morning. I wasn’t as prepared as I wanted to be and I was more nervous than usual about my first impression. 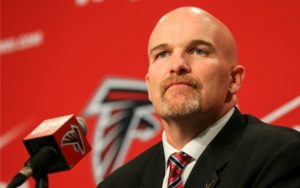 Sarah, Head Coach Dan Quinn’s assistant, greeted me and led me outside to watch practice. There was hip hop blasting, guys running from drill to drill and it was apparent everyone was happy to be there. Sarah stood with me as I surveyed the OTA’s and said, “Everyone loves Quinny.” I thought that was such a familial nickname for a coach that looked and sounded no nonsense. From the interviews I’d seen on TV, he sounded more like a military strategist than a guy I’d share a beer with.

We walked upstairs after practice and I met Coach Quinn outside his office. He smiled, shook my hand and asked me how I pronounced my name so he could get it right. Not many people do that and it showed he genuinely cared about our time together. As we sat down in his office I learned his energy is undeniable, and the m 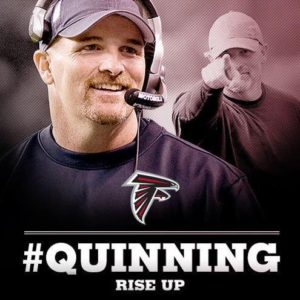 otivation he brings makes everyone not want to let him down.

Coach Quinn left Hofstra with a lot of confidence to start his NFL coaching career with Bill Walsh, Terry Donahue and Steve Mariucci in San Francisco. However, he said after his first day there he was convinced he didn’t know anything about football. He buckled down and learned defensive line play and how to evaluate players. Quinn later credits Nick Saban, from his time in Miami, who throws some of the best practices he’s seen and Pete Carroll in Seattle who challenged him to see how much he could get out of his players. He now sees it as his job to motivate all the Falcons players and coaches to test their limits.

He doesn’t allow any hazing on his team, but instead reminds veterans how much they would have improved if they had a player take them under their wing. Coach Quinn explains the best teams he’s been a part of have been tight and the bonding allows them to understand the vision he’s putting in place for a successful season. 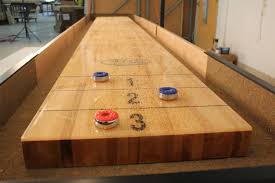 leboard he has in his office. It’s not your average cruise ship game, but the one you find in bars with sand. He makes the competition fun so there is a constant sharpening of skill and enjoyment with the work.

When we talk about music he tells me he’s a big Bon Jovi fan and he’s seen him play in a number of states…growing up in Jersey will do that to you. As a second year head coach, I can tell Coach Quinn’s window for getting away is small, but he says on vacation he chooses rum over tequila and likes to spend time at the beach with his friends and family. He’s now equipped with a Margaritaville Frozen Concoction Maker for such an occasion. He also takes his love for the beach to the grill, adding pineapple to his burger.

It only took me an afternoon to understand why players like going to work for Coach Quinn every day. Listen to this week’s podcast you’ll get why nobody on the Atlanta Falcons wants to let Quinny down too.