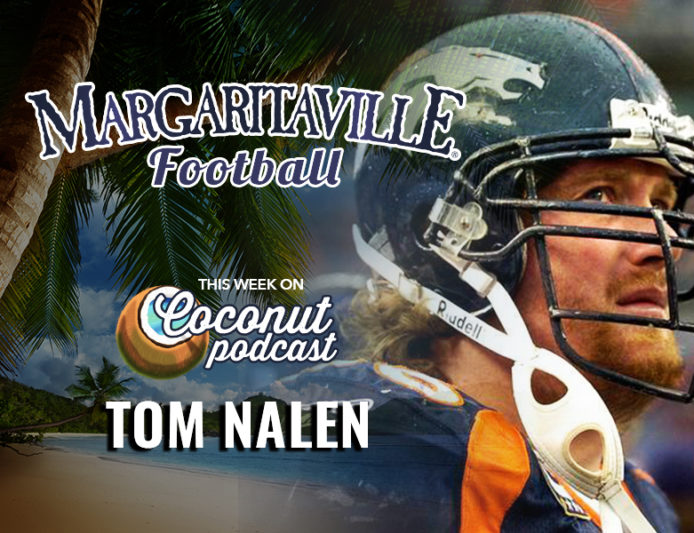 I got a chance to have Tom Nalen as a guest on the Coconut Podcast during a trip to Denver and met him outside a restaurant for lunch. It was a sunny day and as I walked up I saw him sitting outside at a table with his mountain bike, wearing shorts and a t-shirt. He looked like a college student, only a little older, and with way more scars on his knees and bicep from surgeries (he’s had 8 knee surgeries and a bicep repaired during his career).

Tom Nalen is a two-time Super Bowl Champion and a former All-Pro center for the Denver Broncos…not that he’d tell you. Tom is humble when it comes to his career saying, “I’m an o-lineman, there is no resume. I got in the way of people for a while. That’s basically it.” He was drafted out of Boston College by the Broncos in the seventh round and was considered undersized at 6’3 and 280lbs. It didn’t stop him from having a successful 15 year career in Denver, being named the 2003 Offensive Lineman of the year and a member of the Broncos Ring Of Fame.

He doesn’t brag about any of this, which makes sense. During his pro football tenure he didn’t talk to the media. It was a rule 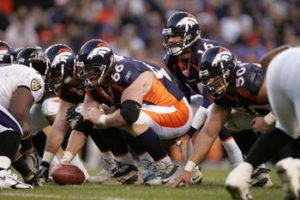 placed on him and his fellow linemen each year by the famed coach, Alex Gibbs, to keep them out of the media spotlight. It was policed by his core unit, with fines given when someone slipped up. There were fines for ratting on other players too, so the o-line had to be tricky when they wanted to point out a player. They were fined $5 a sentence and the money at the end of year went to team drinking. We have a fine system on the Jimmy Buffett tour that goes to crew drinking, so we’re in good company!

Tom thinks that not talking to media helped him at that age, allowing he and his o-line teammates to build camaraderie. Funny to know that when Tom retired he went into radio work for Altitude Sports after years of being silent on the gridiron. In his interview he shares entertaining stories and insight from the game that current players don’t. Tom’s not afraid to let it rip in conversation now that he has no coaches or fines and I found him to be one of the most genuine people I’ve spoken to this year. 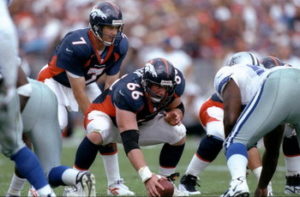 I asked about blocking Gilbert Brown in Super Bowl 32 and if he had any good Elway stories. He told me that right before the last play of the game, the knee down to seal the win for Denver’s first ever championship, Elway walked up to him in the huddle and said, “Get me that f-ing ball.” My favorite story is from his rookie year when he was introduced to the “forklift.” Teaser: It involves an Atlanta Falcons defensive lineman named Jumpy Geathers and being picked up and carried past John Elway during a game.

Tom is not a tequila fan, but he has been to a Buffett show. He went a year ago in Denver and said the best part was the people watching – everyone wearing the same tropical gear, like they were all cheering for the same team. He gets it! One of his favorite summer vacations was spent in Croatia on the Adriatic Sea, jumping off a dock into the clear water that area is known for. Beer seems to be his beach drink of choice but for the longest time he thought Jack Daniels was his friend because he wouldn’t get hangovers from it. That was until he drank a whole bottle one night and Jack Daniels failed him.

Listen to the full interview here. Tom has a great sense of humor and after you listen to him describe his Margaritaville inspired touchdown dance I think you’ll want to sit down at a bar with him and hear what else he has to say. I know I do.