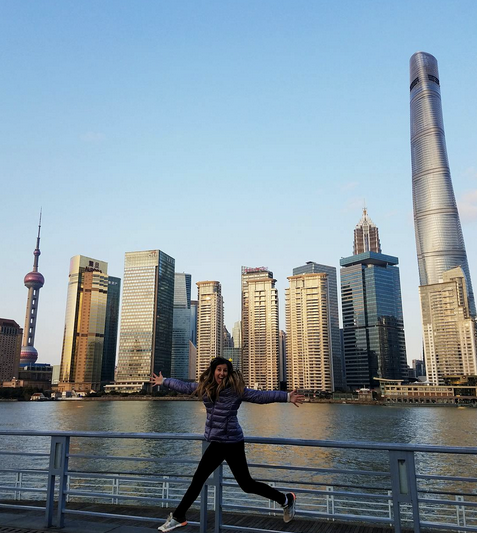 Greetings from China! With only two days between Japan and China, I felt unprepared for what was to come. All I knew was that I wanted to go see the Great Wall of China. The night before we got off the ship, my entire travel plan changed. Now in addition to seeing the Great Wall, I would be traveling to Hong Kong. China is huge and traveling from Shanghai to Beijing to Hong Kong and back to Shanghai in under six days sounds like an unattainable and crazy plan (especially if you have nothing booked), but that is exactly why I wanted to do it. 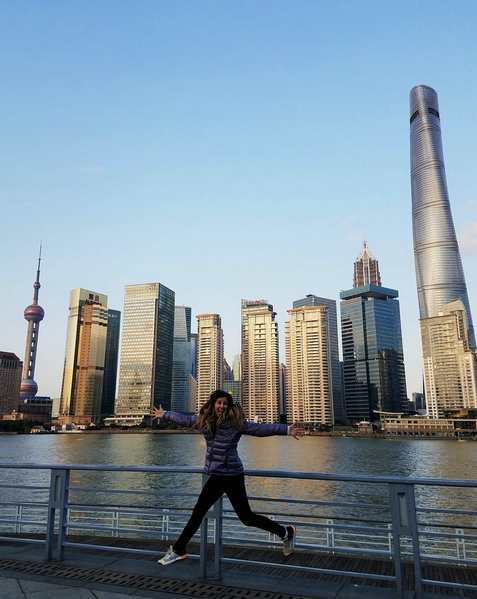 I’ve always been motivated by being told I can’t do something, since ultimately I am the one who decides what I can and can’t accomplish.

The basic itinerary for China was to spend day one in Shanghai. Then at 2:30 a.m. of the second day (aka the first night), we would head to the airport and buy our plane tickets to Beijing. The second day was to be spent in Beijing. Day 3 and 4 in Hong Kong, and then, Day 5, travel back to Shanghai just in time to spend Day 6 in Shanghai (and avoid being late for the ship). Ambitious, right? Right.

All the research I did on China said that it was the hardest country to travel independently in. Additionally, we were there during the Chinese New Year – which meant millions of people would be traveling – and buying plane tickets would be almost impossible. The chances that these travel plans would work were slim, but spoiler alert, they worked out PERFECTLY. This time I would be traveling with a completely new group of six people total. For an enjoyable reading experience, I will break up my writing by cities.

SHANGHAI
I spent a total of three days in Shanghai and this city has a lot to offer. The port our ship was docked in had an incredible view of the entire city skyline. A fellow Chicagoan said that he’s never a skyline so beautiful and I’ll admit it was a close second to Chicago. The first stop was Nanjing Road. This road has everything from big brand name stores to small gift shops. My favorite part of this road were all the people. In between getting shoved, cut off and occasionally spit on (or peed on if you are my friend Tommy), you can truly experience the overpopulation of China.

I thought being from a big city could prepare me for this…but it doesn’t. The people-watching experience was exciting for me, but is equally exciting for some locals. They had no fear in putting their cameras directly in my face to take a photo of me. Is this what being Jimmy Buffett feels like? It was amusing to say the least. 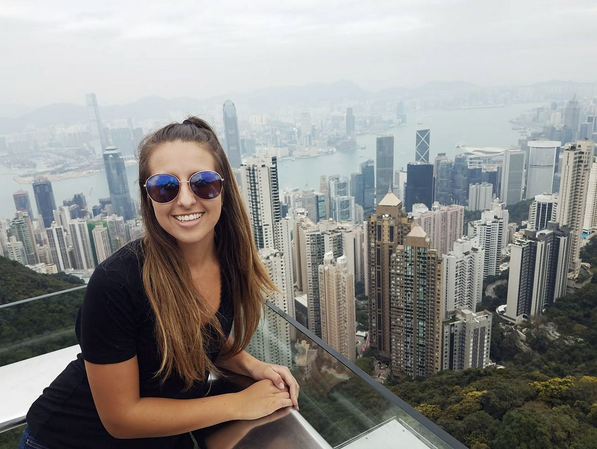 The building can be seen from various parts of the city but getting there is an adventure. It’s across the canal and requires taking a ferry to cross. We spent quite some time trying to find this ferry and the only reason we found it was because of a mob of people trying to get into the gates. We squeezed our way into the crowd and paid the equivalent of a few pennies to board. What turned into a causal walk to the ferry turned into a full on sprint as we realized the gates were closing and everyone around us was running. It was every man for themselves and thankfully the entire group managed to get on the ferry. From the ferry we made our way up to the top of the Shanghai Tower. It was already dark out by this point and the entire city was lit up. The best part about this view you ask? We could see home from here…the MV Odyssey was lit up and could be seen from the top! After the tower I went straight back home because I had an early morning start.

The two days I spent in Shanghai at the end of my trip consisted of going to the Pearl Market, a “secondary” market in a subway station and walking around different plazas and parks. It was a much needed rest. But back to present time, this is where the fun starts. The group I would be traveling with met up on the ship at 2:30 a.m., and to our surprise everyone came on time. From there we went to the airport. Turns out the airport was closed so we played card games outside for an hour. It was after an hour we realized we were in the wrong terminal and that the actual terminal we needed was open. Fast forward to about 5 a.m. We still hadn’t bought any plane tickets, and the ticket counter was opening “soonish.” Around 5:30 the counter opened and through a stressful and chaotic 15 minutes, we somehow bought two flight tickets. We needed one more but we’d figure that out in Beijing. We hoped on the plane and two hours later we arrived in Beijing.

BEIJING
Our flight landed around 9 a.m. and the flight we bought upon arrival left Beijing at 9 p.m. that same night. We ran out the airport and ordered a taxi to take us to the Great Wall of China. After about a two hour drive, we arrived to the world wonder. Speechless. None of us could believe that we had successfully made it there. We took a ski lift up and walked around the wall. I’ve always considered myself pretty great, but this wall really puts you in your place. It is absolutely breathtaking. I never pictured that the mountains it was built on would be so beautiful. 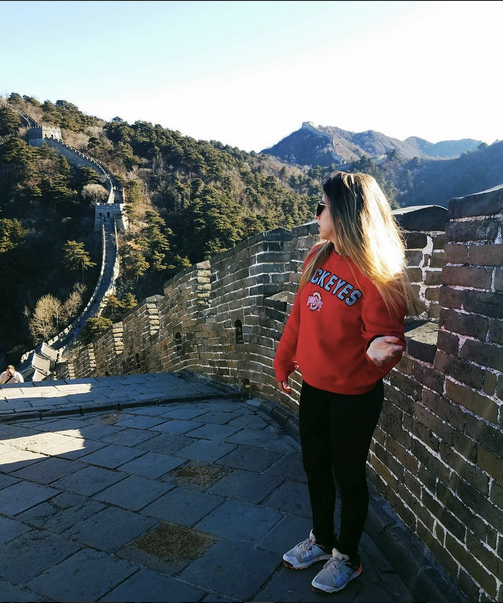 I’ll never forget the feeling when I took a moment to truly take in my surroundings and question how I got here. Planning a semester at sea isn’t easy, but it is so worth it. Being on the Great Wall was unforgettable but being able to toboggan down the wall was exhilarating. That’s right: I tobogganed down the Great Wall of China while wearing a panda hat. It’s only offered at the Mu Tian Yu section of the Great Wall, so if it’s something that interests you head over there! (And it should interest you because it was AWESOME). With no time to waste, we took a taxi to the Forbidden City. Everything in the Forbidden City is enormous. The buildings are symbols of power and they are almost intimidating.

Unfortunately, Tienanmen Square was closed when we arrived. We walked around to major sites but had a flight to catch!

Our next flight was to Shenzhen, a city near Hong Kong. It was cheaper to fly there and then travel to Hong Kong via train. Our flight arrived at 2 a.m. and we didn’t realize the trains didn’t run that early. Time for a four hour nap on the airport floor!

HONG KONG
Eventually we arrived to Hong Kong! It was significantly warmer in Hong Kong than in Beijing. Thank goodness. I fell in love with Hong Kong within moments of arriving. The air was not smog-filled, as Beijing and Shanghai were, and it was a very green city. The British influence is seen instantly because they drive on the left side of the road in Hong Kong. From cultural norms to currency used, the differences between Hong Kong and mainland China were striking. Fortunately for our group (who hasn’t showered or really slept in a long time) one of the guys had a family friend in Hong Kong. It was an American couple who moved to Hong Kong for work seven years ago. They let us stay at their house that night, and I’m forever grateful for them. Their house was located about 30 minutes from downtown overlooking a bay. I had to ask the hostess how many hours a day she stares out at the remarkable view. The view is honestly what dreams are made of. We ate lunch at the American Club and had much needed burgers and french fries.

After lunch we explored Stanley Beach and caught an epic sunset. Once it got dark we went to a world famous dim sum restaurant. Dim sum is a Chinese dish that serves bite-size portions of delicious food. All the traveling has really run down our bodies, and the endless supply of food here was lifesaving. My favorite was the pork dumpling. Simple yet tasty. The night was still young and although exhausted we headed out to check out the night life. All I am going to say is that if you are ever in Hong Kong, you need to check out Lan Kwai Fong, otherwise known as LKF.

The following morning we went to Victoria’s Peak, a viewing area overlooking the entire city and water. You can take a tram up to the top but the line to get on the tram is over an hour. It may be easier to just take a taxi up. The view at the top is breathtaking. There is something special about seeing a city from up above. Unfortunately we were once again on a time crunch, so we headed back to the Shenzhen airport and flew back to Shanghai.

The time I spent in China and Hong Kong have taken a long time to process. The memories I made traveling taught me I am capable of such intense travel. I packed really light for this trip and it paid off! Walking around the Great Wall of China would not have been fun if I had a heavy backpack. In all the craziness that was China the phrase “everything always works out” is ultimately the best way to describe it.

Thanks for reading and Fins Up!