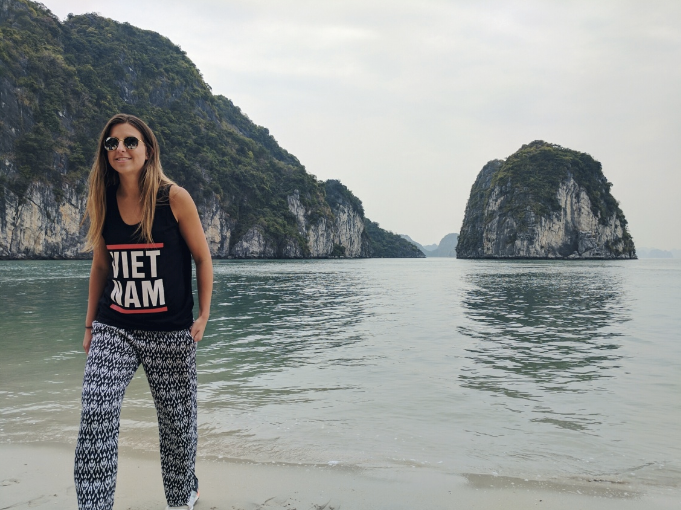 Xin chào Vietnam and hellooo warm weather! The four days from China to Vietnam were spent catching up on sleep and welcoming back the heat. Ho Chi Minh City, or Saigon, would be our home port for the next five days. My level of preparation for Vietnam was the same as China, meaning it was nonexistent. After successfully navigating China without any booked plans, I felt confident Vietnam would work out. And besides, there was only one thing I really wanted to do in Vietnam, how hard could it be to figure that out?

Ha Long Bay is a natural world wonder located in Northern Vietnam. Kayaking there was the only thing I needed to accomplish in Vietnam, everything else would be a bonus. You might be thinking: Ho Chi Minh City is in southern Vietnam and Ha Long Bay is in the North, how do you plan on getting there? Winging it, that’s how. For the time being, my plan was to explore Ho Chi Minh City with a friend for a few hours and later optimistically head toward the airport.

As my friend and I walked around the port we were overwhelmed with confusion. We didn’t know which way to walk, but more importantly, we had no clue how to even begin crossing the street. If you have never seen what the roads look like in Vietnam, you have to watch a video ASAP. Imagine in a city of 10 million people, 8 million have motorbikes. Now imagine those 8 million motorbikes driving around constantly and not adhering to the stoplights. It’s really a crazy sight, and trying to cross the street is a rush. To cross you literally just walk into moving traffic and hope for the best. Somehow everyone swerves around you and you’re able to cross somewhat safely. It’s an exhilarating rush of adrenaline followed by an enormous sense of accomplishment.

Once we got the hang of crossing the street, we headed toward the famous Ben Tham Market. The market is home to hundreds of little shops that offer anything from jewelry to snacks to even custom made dresses. If you want to bargain, this is the place to go. I’m not good at bargaining at all (I ALWAYS overpay) so I just headed to do something I’m good at: eating. We had lunch at Pho 2000 (that has photos of Bill Clinton EVERYWHERE) and afterwards headed to the War Remnants Museum. I think it’s important to expand our perspectives of the world and this museum did that. It was a quick stop but a very informative one. The museum closed for the day and that was our sign to head to the airport.

My friend and I met with four other people we wanted to travel with. The four of them all had bought plane tickets in advance, so the two of us had to work our magic to get tickets. To our surprise, getting tickets was easier than in China and we even paid less than the rest of our friends (SCORE!). I was one step closer to achieving my dream of kayaking in Ha Long Bay. All that needed to be figured out now was how to actually get to Ha Long Bay. The rest of our group had tickets for an overnight boat cruise that we were told was sold out. There was no way I came all this way to not get to the bay. After some negotiation, we managed to get on the same boat cruise at a lower price than our friends (sorry, not sorry).

The phrase “dreams to reality” kept repeating itself in my head as we took a four hour bus to our boat cruise. Only Semester at Sea students would get off one ship to get onto another. Our boat cruise was a nice boat with an open patio on the roof that over looked the bay. We sailed out two hours to get into the middle of the bay. Wow, I’ve seen pictures of Ha Long Bay but once again I am at a loss of words on how to describe the natural beauty of it. The rocks that jet out of the water are said to be parts of a mountain that broke apart, filling up the horizon with a serene view. A calming fog surrounds the water giving the bay a dream-like essence. As calming as the view was, I couldn’t hide my excitement to finally go kayaking. 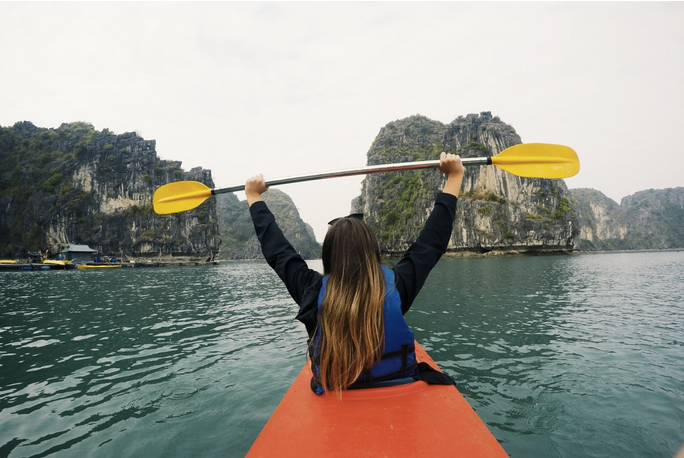 The kayaks were for two people and as my partner was getting into the kayak, he managed to hit our tour guide in the face with the paddle. Fortunately he wasn’t injured and we are able to start our kayaking adventures. Something I forgot to mention is that I am low key afraid of water. I love looking at it, being on boats and ships…but the possibility of going underwater terrifies me. So every other time I have kayaked I was always on the edge worrying about tipping over. That fear didn’t even cross my mind as I began paddling through the world wonder. I probably wasn’t the best partner to kayak with considering I would stop every few seconds to stare at beauty that was surrounding me but I couldn’t help it. I was in complete and utter amazement at how incredible our planet was. Unfortunately, there is talk that in a few years Ha Long Bay may be shut down from tourists so now is the time to go. 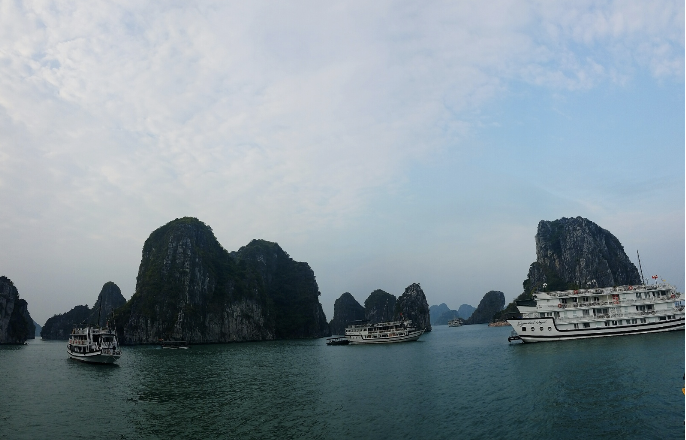 I could spend hours trying to explain how beautiful Ha Long Bay is and how it felt being there, but I won’t. I spent a lot of time looking out at the views and taking time to reflect and appreciate everyone and everything that had gotten me here. Reflection is something I have always worked into my habits but this voyage has given it a bigger meaning. As we get closer to the halfway point of our voyage, I’ll try to do a reflection blog. But back to Vietnam.

The rest of the boat cruise was relaxing and as we were leaving one of the bartenders told me he loved me. I told him I loved him too and then we hugged. It’s the simple interactions with people that make traveling much more meaningful. The journey back to Ho Chi Minh City didn’t go as smoothly as the journey to Ha Noi. Long story short, none of us had plane tickets back to the city and every plane was delayed. We managed to get tickets for a 10 p.m. flight but it was delayed until 2 a.m. During that time a six year old child befriended me but then turned evil and hit me with all his toys for an hour as I tried to sleep in the terminal. Good times.

The last two days in Ho Chi Minh City we visited the Cu Chi Tunnels to add a sense of realism to the war. We also got full body massages that only cost $11 USD. The phrase “you get what you paid for” has a lot of truth in it. That other phrase “Let’s Get Weird” also applies to this massage. Let’s just say the five of us who got massages are a lot closer now that we experienced that together.

Through the ups and down (the child attacking me), I was sad leaving Vietnam. The people were wonderful, the coffee was heavenly, the landscape was jaw dropping and the culture was so rich. It’s exciting to see where the economic development takes the country in the next few years. It’s not a goodbye Vietnam, it’s a sea ya later!

Next stop: Myanmar!
Fins Up!
Claudia