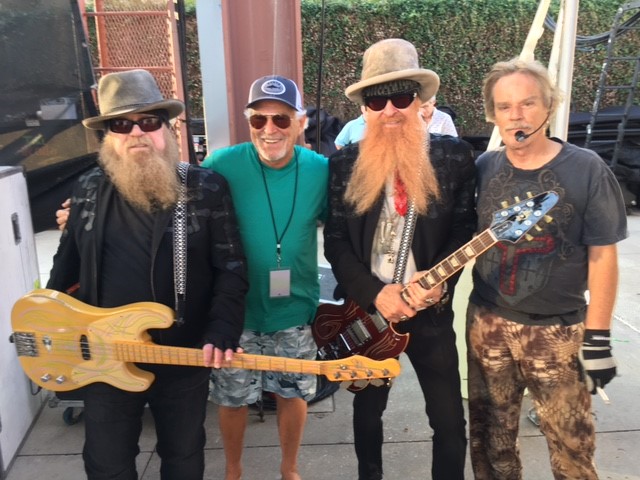 We’re two legs into the IDK Changes Looks At 40 Tour and it’s hard to believe how fast the last two months have gone by.  It seems like days ago we were rehearsing in Charleston, SC.  We kicked off the 2017 tour in Chucktown at a tennis stadium in early May and since then we’ve covered many miles and seen a lot of smiles.  Our latest stop found us in Frisco, Texas, for an event that looked like a misprint on the ticket:

Last year, when I first heard this show was booked, I thought it was fantastic!  I mean, who doesn’t air guitar to ZZ Top when listening to them on the radio?  Their song catalogue starts in the 1970s and even to this day all their hits hold their own.  Unfortunately, their appearance last year was cancelled, when Dusty Hill (bassist) inured his arm, but Jimmy really wanted a Texas band for Frisco and made sure to book them again for this year’s sold out soccer stadium concert. 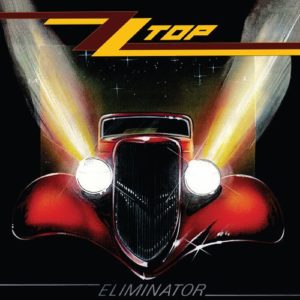 You might be asking, “What kind of cocktail do you get when you mix blues and boogie rock with the Margaritaville State of Mind?” I compare it to a good tequila shot.  It starts off strong (there’s no mistaking it’s tequila), but then it goes down smooth, gets you out of your seat and then you’re dancing before your feet know what’s happening.  Buffett and ZZ Top may seem as far away on the music spectrum as their names do alphabetically, but it’s the professional showmanship and sense of humor that bridges the gap.  ZZ Top is a great addition to the party because like the Citizens of Margaritaville, they have a sense of humor and they’re as genuine as the 1933 Ford Coupe that graces their Eliminator album cover.

It was a site to see when Billy Gibbons, Dusty Hill and Frank Beard (ironically the only one without a beard) started their set and the cascade of beach balls began to rain down from the upper deck. 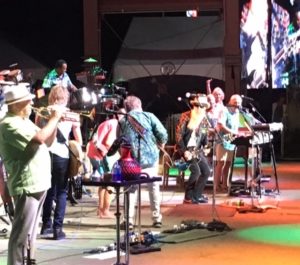 My favorite part of the night was during Jimmy’s set.  Early that day Jimmy asked for Billy Gibbon’s phone number so he could call him on his way to the venue.  He wanted to work up a song in the set with Billy playing lead guitar.  Billy was all for it and as sound check was starting I saw him walk like a cowboy into a saloon to give Jimmy a hug and a handshake.  The idea was to work up Last Man Standing and have Billy lay some licks down during the song.

Later that night, halfway through Jimmy’s set, Billy was introduced to a roaring crowd and Last Man Standing got underway.  The Coral Reefer Band played the song like usual and it looked like the crowd and CRB were waiting for Billy to make his mark.  As I said before, ZZ Top is made of pros and Billy was a gentleman knowing he was a guest on stage.  He allowed Peter Mayer all the space he needed on slide guitar, which really is the song’s distinct sound.  It wasn’t until the end of the song that Billy took one step forward and played a lead solo that took the song into another orbit.  When all the crew techs on stage are standing with their mouths open, you know something special is being witnessed.

And good news, you can witness it all again here:

Moments like this are one of my favorite things about live music.  It’s a recipe on stage between a 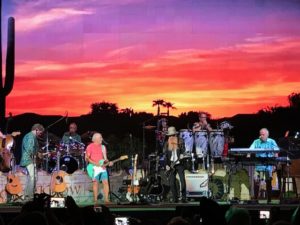 rtists and sometimes certain ingredients can take a song to a new level.  That’s what everyone saw and heard in Frisco, Texas, that night.  Two professionals standing on stage, stirring it up and having fun.  There’s a lot of experience that goes into a performance like that and I’ll bet my paycheck if Jimmy Buffett and Billy Gibbons ever walked into a bar together they would be the last men standing.