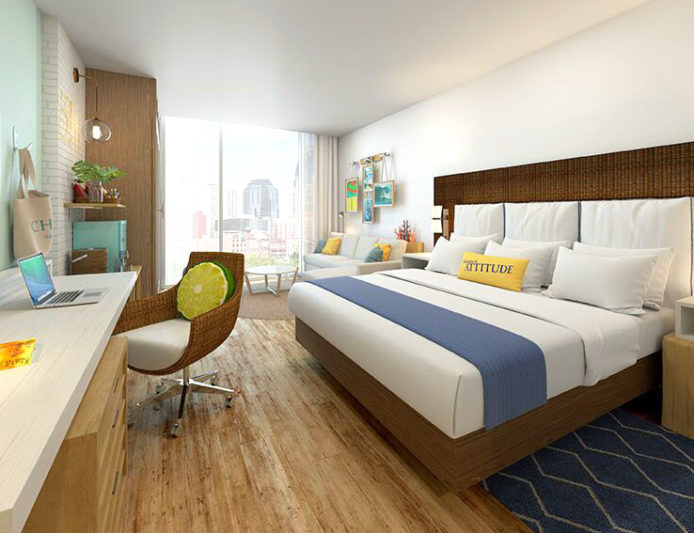 “The groundbreaking of Margaritaville Nashville Hotel marks the arrival of an entirely unique vacation concept for the area, combining a metropolitan latitude with Margaritaville’s island attitude,” said Darby Campbell, owner and president of Safe Harbor Development, which is developing the property. “We couldn’t be happier to be on our way to welcoming visitors at what will be a true urban escape in the heart of Music City.”

During the groundbreaking celebration, attendees enjoyed Southern cuisine, Who’s to Blame margaritas and Margaritaville’s island-style LandShark® Lager, stilt walkers, and a solo guitarist. A program of remarks featured Campbell, as well as John Cohlan, chief executive officer of Margaritaville Holdings and Dusty Tonkin, EVP, Sales and Marketing at Wyndham Vacation Ownership. There was also a special appearance by Kirsten Winquist, on-air host and program director of SiriusXM®’s Radio Margaritaville, who conducted interviews during the event.

Centrally located just steps from the Music City Center at the corner of 5th Ave. S and Peabody St., Margaritaville Nashville Hotel will feature 217 guestrooms; 52 Margaritaville Vacation Club® by Wyndham timeshare units; a rooftop relaxation and entertainment area with a pool, sundeck, fire pits and live entertainment; a fitness center; more than 10,000 square feet of function space; a Starbucks® coffee shop; and two new Margaritaville dining concepts – FINS Beach Bar and JWB Grill. The property is anticipated to open in Summer 2019 and will be the first Margaritaville Hotel in a metropolitan area.