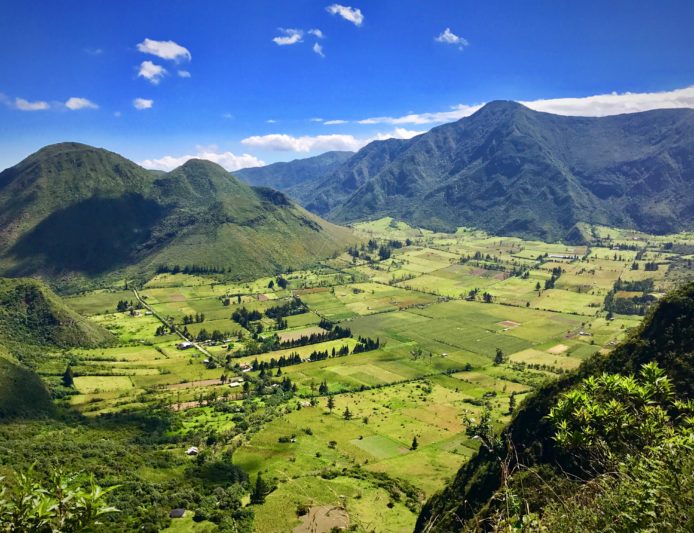 For years my best friend and I would talk about taking a girls trip for our ten-year “friendiversary.” It would be an epic adventure, just the two of us exploring a new part of the world.

As the anniversary approached last June, we spent an obnoxious amount of time researching destinations, activities, and accommodations. We wanted somewhere different from our home – a place with unique landscapes and a different culture… a place that would challenge and excite us. After countless hours of investigation and discussion, we concluded that Ecuador was the place to fulfill our wanderlust, and here’s why:

1. It’s Relatively Close to the U.S. and Reasonably Priced

From the United States, you can get to Ecuador in just over 4 hours – not too bad for traveling to another continent! With its proximity to the US and being only one hour behind Eastern Standard Time, Ecuador is perfect for a quick getaway without the worry of layovers and jet lag.

Just under a year ago, I purchased my non-stop flight from Miami to Quito for $385.00 – cheaper than some national flights! Rates are always changing, and new deals pop up every day, so the best way to snag a bargain is to sign up for travel alerts and be flexible with your travel dates.

The cost of visiting the country is also relatively inexpensive compared to the US – dining out, museums, churches – all can be done for less than $10 a pop. Additionally, a lot of the landmarks are free to visit. They have also converted to the USD, which saves the hassle of currency exchange.

The country’s capital city, and one of five of Ecuador’s UNESCO World Heritage Sites, Quito sits high in the Andes at over 9,350ft, making it the world’s second highest elevated capital city, and one of the most magical landscapes I have ever seen. With the beautiful architecture and history of Old Town, coupled with the bustling nightlife of the La Mariscal district, Quito has both old Spanish charm and hip, modern entertainment. 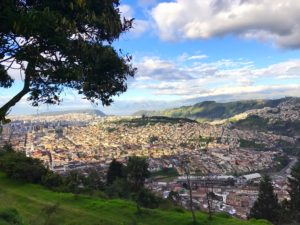 We only had one full day in Quito and decided that having a tour guide would maximize our time. Juan Pablo, or JP as he liked to be called, was an excellent guide. Native to Quito and also a travel writer, he was very knowledgeable of the city, its history, art, politics, etc. He took us to both tourist locations and local hotspots, and his stories along the way made the experience all the more enriching.

We walked through Old Town, up and down the steep cobblestone streets, 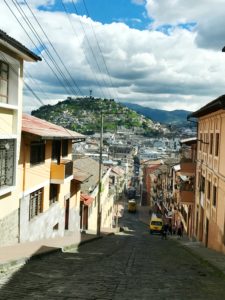 strolling through the churches. We sampled whiskey covered candy from street vendors and sipped macchiatos from a rooftop cafe.

We drove to the plateau of El Panecillo for insane views of the city and surrounding Andes Mountains. At night we hit New Town (La Mariscal), where we enjoyed a delicious patio dinner while soaking in the Ecuadorian atmosphere.

*Insider tip – Although Quito has come along way, crime does still happen. We never felt in danger, but we did get some unwanted stares in La Mariscal at night. I’d recommend traveling with someone, especially after dark, and always be aware of your surroundings.

Have you ever wondered what it felt like to be in two places at once? Or what about standing at the center of the world? We were able to accomplish both at Mitad del Mundo, or The Middle of The World in English.

About 20 miles outside of Quito, lies the equatorial line dividing the northern and southern hemispheres. Here you can snap a picture standing at a Latitude of 00º00’00” – Hello Instagram! Initially, thanks to inaccurate GPS, the line, along with a monument, was placed 820ft to the south of the correct location. Despite its inaccuracy,  this mishap landmark remains a popular tourist destination.

There are two places where you can straddle the correct equatorial line. One is in the small town of Calacalí, where the rightful monument stands tall in the town’s center. The other is at the Museo Intiñan. 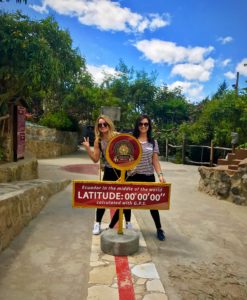 Museo Intiñan is a small attraction, a few minutes drive from Calacalí and also on the equator. Here we took a short tour and were told stories of the Ecuadorian culture. We participated in some interactive exhibits, challenging the laws of physics. We witnessed the power of the Coriolis effect – standing in the northern hemisphere, we watched the water from a basin drain counterclockwise. Moving a few feet over into the southern hemisphere, the water drained clockwise. And finally we placed the basin on the line, and the water went straight down – my mind was blown.

Ecuador may be one of the smaller South American countries, but it has it all in terms of ecosystems. With the Galapagos Islands to the west, the Amazon Rainforest to the east, the Andes Mountains in the middle and volcanoes throughout – this is the perfect setting for an adventure-filled trip.

Amazon Rainforest
Trekking through the rainforest had always been on my bucket list, and the convenience of the Ecuadorian Amazon made this dream attainable. From Quito, the edge of the jungle can be reached in as little as 4 hours. As novice rainforest explorers with time constraints, this was the perfect introduction to the Amazon.

Wanting an authentic jungle experience, we chose to stay at Cotococha Amazon Lodge. This eco-lodge was the perfect combination of luxury and ‘roughing it.’ There was no electricity, no wifi to connect to as we lay in bed, and creatures of the jungle crept all around us. But we were in the Amazon! Our jungle bungalow – like something out of a magazine –  sat directly on the banks of the Napo River, and every morning we awoke to birds chirping and monkeys calling in the distance – it was paradise. 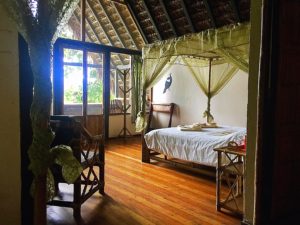 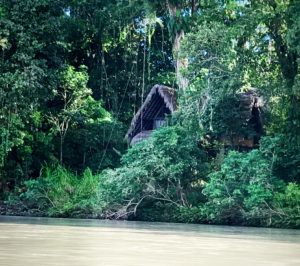 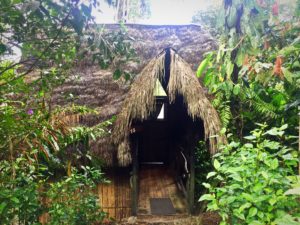 Our day trekking in the jungle began with a 45-minute drive to Cabañas Pimpilala. From there we spent the better part of the afternoon hiking uphill and scaling waterfalls with nothing more than some rope and a few prayers. We ate termites and learned how the indigenous Kichwa people use the forest for survival. We marveled at butterflies the size of grapefruit and avoided snakes at all costs. We admired the rainforest canopy after the 3-hour trek to the top, and while following the river back down, we made face masks from clay along the riverbanks – which, by the way, left my cheeks smoother than a baby’s! 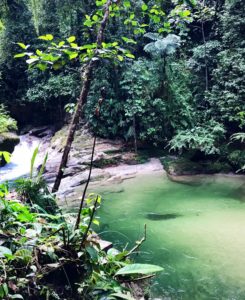 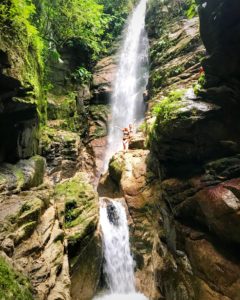 Our day in the Amazon alone was worth the trip to Ecuador. In just one short day we were able to experience a small taste of a massive and diverse ecosystem… an experience I won’t soon forget.

*Insider tip – Utilize an experienced jungle guide. Yacu, a local Kichwa resident, was our guide for the day. His skill and knowledge of the forest coupled with his passion for conservation made this excursion one of the highlights of our trip. If you ever find yourself in Ecuador, I highly recommend Yacu as a tour guide.

Andes Mountains
The route from Quito to the Amazon takes you directly through the Andes mountain range and hosts breathtaking scenes around every corner. Cliffside waterfalls, mountain cows, tiny villages, babbling brooks and raging rivers, all graced us with their presence along the drive. At the highest point, we reached over 13,000ft, passing through a section of the Cloud Forest, where – you guessed it – we were driving amongst the clouds! 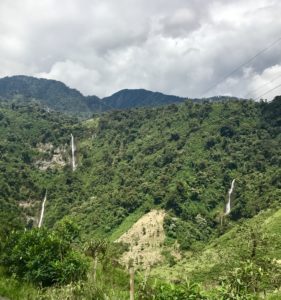 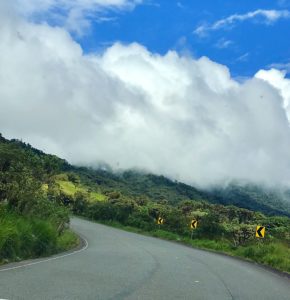 I remember feeling an overwhelming sense of wonder as we drove through the winding mountain range on our way to Cotococha – I could have spent the entire trip cruising around the mountains and I would have been completely content.

*Insider tip – Rather than taking the more economical tour bus, splurge on private transportation to get to the Amazon. Driving through the Andes is no easy task. Landslides, erosion, and areas lacking proper infrastructure are scattered along the route, making some sections quite dangerous. After hearing a few horror stories, we agreed it was worth it to hire an experienced driver. It was money well spent, as our driver Fernando was not only attentive and cautious, he was also very friendly and a fun person to share the journey with.

Galapagos Islands
Unfortunately, due to timeframes, we weren’t able to make it over to the islands, but let me tell you a few reasons why I will most definitely be returning to this UNESCO World Heritage Site.

The islands of this volcanic archipelago lay in the Pacific Ocean about 620 miles off the coast of Ecuador, and they host a diverse array of plant and animal life. With different islands hosting different species, the Galapagos is truly an evolutionary wonder. So much so, Charles Darwin’s study of these animals led to his Theory of Natural Selection.

It is the Galapagos’s beautiful landscapes along with its unique, native wildlife that makes this place such a desired travel destination.

Known for its ‘Avenue of Volcanos,’ Ecuador is home to approximately 25 volcanoes. Just outside of Quito, sits Cotopaxi, Ecuador’s second largest, and one of its most active volcanoes. Towering at more than 19,000 ft., we were able to see this impressive volcano from various points throughout the city.

We also enjoyed breathtaking views of Pululahua, a crater formed from the volcanoes collapse over 2500 years ago. Because of its biodiversity and unique geological formations, Pululahua was declared a Geobotanical Reserve in 1966. Today you will find a small number of inhabitants in this caldera – one of the few in the world with agricultural production. 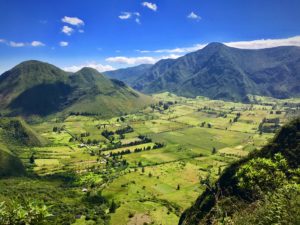 There are many volcano excursions you can go on; from horseback or bike riding to hiking and camping. For us, even just a glimpse of these ancient volcanoes was awe inspiring.

From beaches to rainforests, to ancient cities, Ecuador has it all. For us, it started out as a vacation – a new country to explore while celebrating our friendship. Little did we know, the people, the places, and the beauty that make-up Ecuador would steal a piece of our hearts.

About the Author: My name is Sarah and I love exploring our planet and learning from its many wonders. You can follow my adventures and insights on my blog, TheWanderessWriter.com. Happy travels and Fins Up!

Last-minute getaways are always exciting – the thrill of an unexpected chance to relax or spend time with your partner or friends sends you right to your computer or phone to start making plans. Savvy travelers know how to optimize their trip to ensure

Here are some of the experiences we’re most excited about The day we’ve all been waiting for has finally arrived: the latest addition to the Margaritaville Island Reserve collection is finally open in beautiful Cap Cana. Nestled along one of the w

The new Margaritaville Beach House Key West is now accepting reservations ahead of its official debut opening in less than two weeks, following an ongoing multi-million investment to bring the full Margaritaville experience to life along Key West’s lar