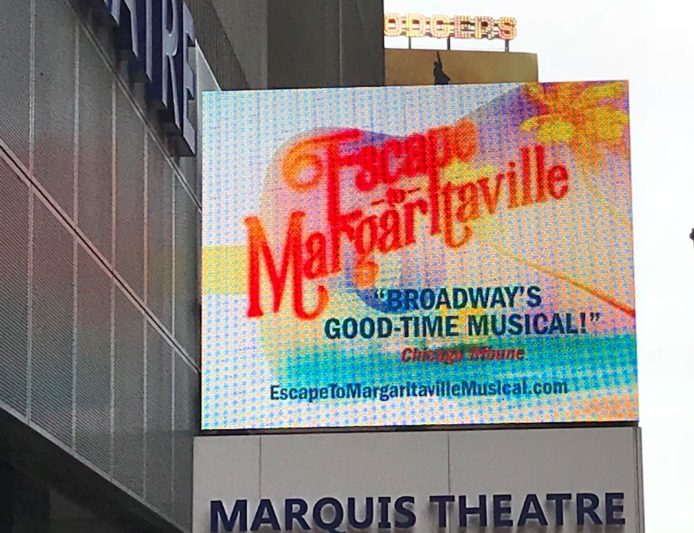 After navigating my way through Times Square, I turned on West 46th and saw THIS! The first sign that this was actually happening – that I was finally going to see the musical that I had been waiting over a year to see. 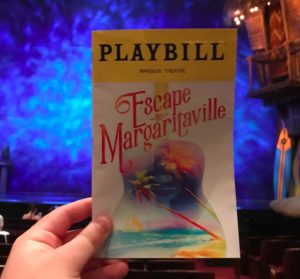 The moment I walked into the theater I was surrounded by beach balls, bright colors, and lots of folks in Hawaiian shirts ready to point me in the right direction. If you attend the show, you will be greeted by LOTS of photo opportunities, so be sure to have your best Margaritaville shirt on and get ready to smile.

As I waited in line to enter the theater, I could already tell this was going to be a good time. I was surrounded by parrot heads and theater lovers from all over the country waiting to escape to Margaritaville. When I walked in, I already felt like I was transported to another world; blenders were churning, music was playing, the set looked amazing, what else did I need? Oh right, the show!

Escape to Margaritaville is a beautiful story about letting go of all of the bad energy in your life, whether it stems from work, family, friends, or just from the general hustle and bustle of life, and finding your “Margaritaville.”

Set to wonderful arrangements of many of Jimmy Buffett’s classic tunes, Escape To Margaritaville takes you on a fun journey through the islands as you watch the protagonists find what Margaritaville means to them while facing some challenges along the way. 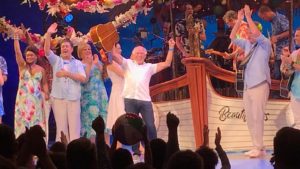 Speaking of Jimmy Buffett… As beach balls rained down on the crowd, a surprise guest appeared on stage. JIMMY BUFFETT! With a guitar in hand, he sang along to “Margaritaville” with the cast and the whole Marquis Theatre. Up until this point, I had never had a chance to see Jimmy in person, so I was really excited to see my boss up on stage.

Now although I didn’t get to meet Jimmy, I got to meet a lot of the cast outside of the theater including Ian Michael Stuart (Chadd/Ensemble), Tiffany Adeline Cole (Swing; understudy for Marley), Paul Alexander Nolan (Tully), Alison Luff (Rachel), Ryann Redmond (Ensemble; understudy for Tammy), Don Sparks (J.D.), and Mike Millan (Goon #1/Jesús/Ensemble).

Unfortunately, all good things must come to an end. Escape To Margaritaville will be setting sail on Broadway one last time on July 1st. For those of you who can make it to New York, DO IT! For those of you who can’t, don’t worry. You can see the cast perform on A Capitol Fourth on PBS on July 4th. However, this isn’t goodbye forever. Escape To Margaritaville will begin its national tour in October of 2019. Keep an eye out for tour info so that you can escape to Margaritaville a little bit closer to home.