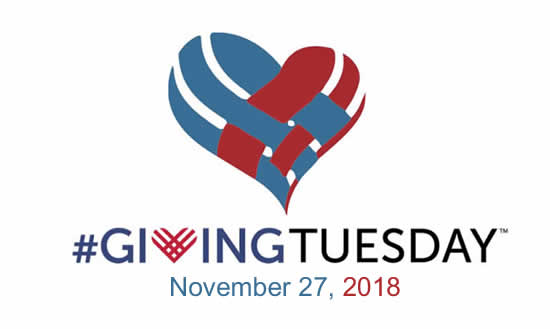 Today is Giving Tuesday – a day, always the Tuesday after Thanksgiving, that encourages a global giving movement. In Margaritaville, giving is one of our most important philosophies…from giving back to our local communities to sharing a Cheeseburger in Paradise with a friend, we believe giving is always better than receiving. And, our college ambassadors feel the same way. Margaritaville University ambassadors all over the globe consistently use their resources to give back to causes they are passionate about.

In honor of Giving Tuesday, we wanted to feature a few ambassadors who have started their charitable season early this year.

Andrew Harmon, The University of Texas at Austin
Following the death of a UT student in West Campus, the most student populated area of Austin, Texas, by a criminal transient in April 2016, a private coalition of concerned parents, stakeholders, and citizens committed to taking constructive action to improve safety and security conditions for UT students, faculty, staff, and visitors, formed the group SafeHorns. With a belief that knowing your neighbors will improve safety, SafeHorns sponsored the 3rd Annual West Campus National Night Out. 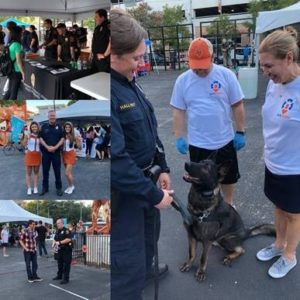 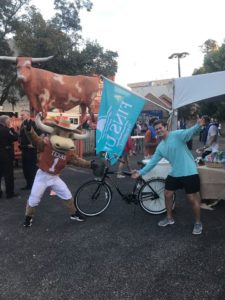 My first year to attend or participate, I was told that this year’s attendance was at least double that of last year. There was a great outpouring of support from Austin Police Department, UTPD, City of Austin elected officials, and university administration. This was a wonderful time for students to meet the first responders in their community.

These efforts make it possible to create positive, sustainable safety improvements on and around the University of Texas at Austin. Great weather, along with providing food, drinks, games, and prizes allowed students to be educated on safety in a carnival-like atmosphere. Having the Longhorn Cheerleaders and mascot, Hookem, also helped to draw in the crowds.

I am extremely thankful to be a part of Margaritaville University, and for their support with this cause I feel so passionately about. I am grateful for the donation of a Beach Cruiser and Cornhole game. They were both a hit and really helped to draw a crowd for this import community safety education opportunity.

Carissa Neary, Elmira College
Last spring everyone had their eye on the Margaritaville beach cruiser that was being raffled off at Elmira College’s Relay for Life. Although the event was anything but tropical as the committee had to move all activities to a rain location, the spirit of Margaritaville shined.

The Relay for Life team raised a total of $3,981 benefiting the American Cancer Society and the number of ticket sales for entries to win the beach cruiser and the contents of its basket definitely made a big impact. 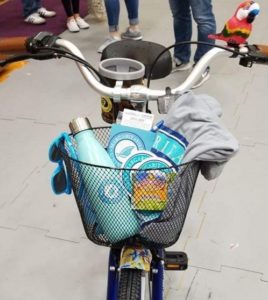 Due to the success of our fundraiser in May, I gave my Class Year an opportunity to fundraise with Margaritaville as well. My class and I received another beach cruiser to raffle off during my school’s family weekend. Parents, community members, and students supported my class year and we were able to raise more than $300. The funds raised will be put towards our class gift to the college and *fingers crossed* a tropical senior week trip.

Alex and James Hughes, York University & University of Guelph
Each November, men around the world grow moustaches in support of the Movember Campaign. Movember is the leading charity changing the face of men’s health. Movember addresses some of the biggest health issues faced by men: prostate cancer, testicular cancer, and mental health and suicide prevention. As brothers we have been supporting Movember for many years; 8 years for Alex, 4 for James. 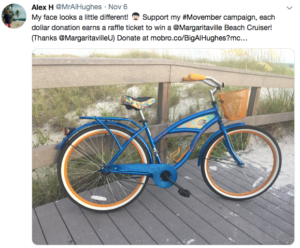 Over the past eight years we have both led Movember Teams on our university campuses, including Wilfrid Laurier University, York University and the University of Guelph. This year, the Hughes Brothers teamed up on one team, “The Moustache Cultivators”. Since 2010 we have raised nearly two thousand dollars for Movember, and this year we’re close to $400 midway through November!

This year, we’ve brought Margaritaville into Movember. One of the main pillars of Movember is positive mental health, there’s no better match than the carefree relaxed lifestyle that Margaritaville has to offer! At the University of Guelph and York University, we are currently holding a raffle, with every dollar raised for Movember, supporters gain the chance to win a Margaritaville Beach Cruiser Bicycle or Margaritaville Prize Pack, all graciously donated by the team at Margaritaville University!

Fins Up!
Alex and James

Peyton Richie and Kendall Bricking, University of the Cumberlands
On Friday, November 9th, we hosted a Margaritaville Night at a new restaurant in Williamsburg, KY, Sizzlin Hot. We raffled off a Frozen Concoction Maker, and gave out tons of other prizes throughout the night. All of the staff got Margaritaville University crewnecks to wear that night, and the chef even made up a few specials for that night, including Margarita Chicken, a Tequila-Lime Tuna, and Chimichurri steak tacos! 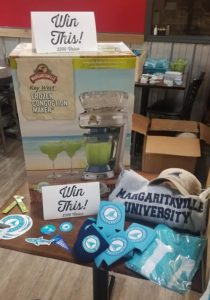 Sizzlin Hot donated 10% of the nights profits to an organization in Kenya, Swahiba Youth Networks, for a campaign that purchases shoes for children living in the slums of Kibera in Nairobi, Kenya. Because of everything that Margaritaville donated, we were able to raise enough money to buy 17 children a new pair of shoes, a meal, and an opportunity to have their feet washed and hear the Gospel!

Join the Global Giving Movement by giving back yourself! Donate to charity, volunteer with a local organization or help spread the word about a cause you’re passionate about.

Visit www.GivingTuesday.org to find ways to give near you.