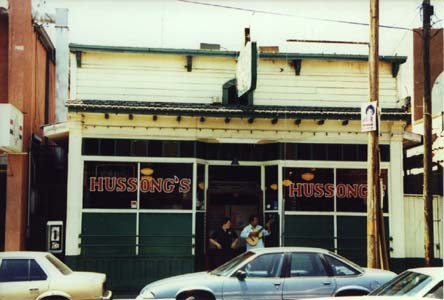 It begins in Germany, 1888, where Johann Hussong decides to immigrate to the United States. By the following year, now “John” Hussong is lured south of the Mexican border by the prospect of gold. Sounds about right. Two more years fly by, and John settles down in Enseñada, Mexico to tend to an injured friend at the only good drinking spot in town, Meiggs Bar.

Now this is where our tale becomes a legend. Literally two days after settling in, the owner of Meiggs bar, J.J., attacks his wife with an ax. We repeat. He attacks her with an ax! She (understandably) skedaddles to California, and after a brief siesta in jail, J.J. asks Hussong to tend the bar while he searches for his wife. Neither J.J. nor his wife ever return. Spooky.

Hussong runs Meiggs for a year and purchases the building across the street for his own place: John Hussong Bar. No ambiguity there. And that bar is still operating today at the same location.

And you know what? That’s not even the best part of the story.

Fast forward another 50 years to 1941, and another German, Margarita Henkel, the daughter of the German ambassador, visits the cantina. Bartender Don Carlos Orozco offers her a new concoction he’s been working on — equal parts tequila, lime, and a Mexican orange liqueur Controy (known as Naranja north of the border), served over ice in a salt-rimmed glass. The name of that drink? You guessed it, the Margarita.

Little has changed in that quaint cantina since 1941. Or 1891 for that matter. John Hussong Bar has become John Hussong’s Cantina. Maybe a little more neon. And there’s now a second location in Las Vegas. But aside from that, it essentially the same place Johann opened over a hundred years ago while in search of gold.

Is the legend true? Honestly, we don’t think it matters. Because we’re all pretty happy with the treasure that got left behind, the margarita.