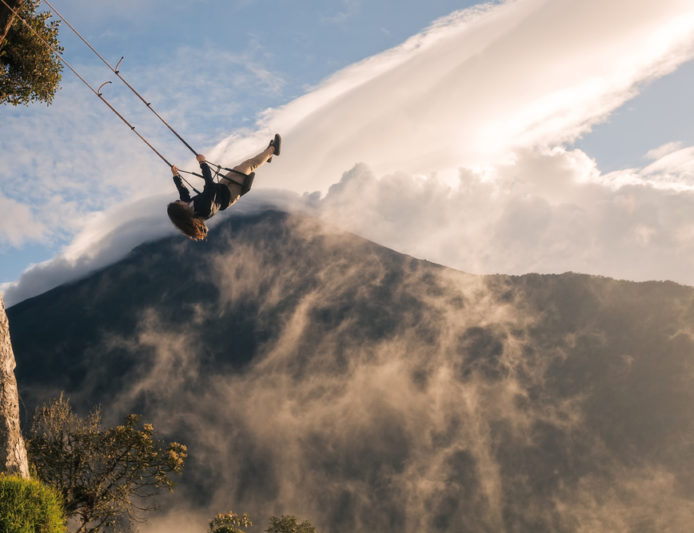 If you thought rope swings were only for kids in swimming holes, think again. The world’s highest rope swing, which hangs from an Ecuadorian tree house, is an global attraction where adventurers of any age can test their grit with a once-in-a-lifetime experience.

Let’s be clear: this rope swing isn’t your average high-stakes attraction. There’s no fee, no ticket, no attendant, no net, not even a seat belt to strap you in and make sure you don’t fall into the canyon that holds the town of Baños below. The rope swing is actually just a metal beam tied between two frayed ropes. It’s tacked onto the seismic monitoring station that oversees the active volcano, Mt. Tungurahua. The station is known as the Casa del Arbol, or the Treehouse. It’s really a treehouse. At the edge of a volcano. Intrigued yet?

Hike up the path from Baños to Bellavista Cloud Forest at the simple, beautiful treehouse. If you’re an adrenaline junkie–or if you just want to check off another “must-do,” climb onto the Swing Andino (insane swing), also known as the Swing at the End of the World. Pump your legs to get yourself flying off a giant cliff 8,350 feet above sea level. Look down at a 100-foot drop. 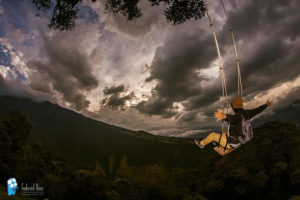 What insane person hung the Insane Swing? No one knows. The hangers probably conceal their identity to protect themselves from prosecution should a daredevil swinger ever swing off. If you’re brave enough, this is one of the wildest rides you’ll take in your life! 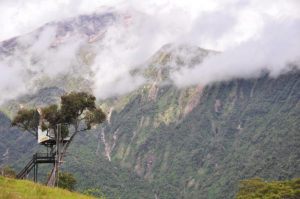