After we dragged ourselves out of Sin City, one (or three) too many Casino cocktails later … we need a break. What better place to sit back, relax, and just chill than Louisiana? 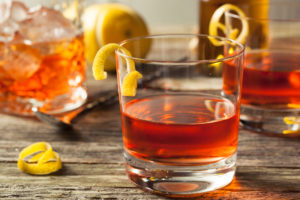 This state’s cocktail, The Sazerac, was declared the official drink of Louisiana’s biggest city, New Orleans, in 2008. It was kind of a no-brainer. NOLA’s known for an abundance of speakeasies, dating all the way back to Prohibition — a law which was overwhelmingly  ignored as home breweries and secret bars opened across the city. To this day, it’s one of the booziest places in the country, and drinking a Sazerac on Mardi Gras in New Orleans is on every cocktail connoisseur’s bucket list.

The Sazerac, a rye cocktail, was created in New Orleans in 1838, just before the Civil War upended the South. Apothecary Antoine Peychaud first concocted a Sazerac with his bitters at a French Quarter bar. The drink initially used cognac as the main ingredient, but when French vineyards hit hard times, rye was substituted instead. It also initially had absinthe instead of Herbsaint, but when absinthe was outlawed in 1912 the change was made. (Absinthe is now legal again, actually, if you want to try an old-school Sazerac.) As it transitioned over the years, it turned into the most iconic cocktail in the Big Easy.

Try another New Orleans classic: the Vieux Carré. It’s made with rye whiskey just like the Sazerac, but with a few additional ingredients.

Directions
Pour all ingredients in a rocks glass. Add ice and stir.