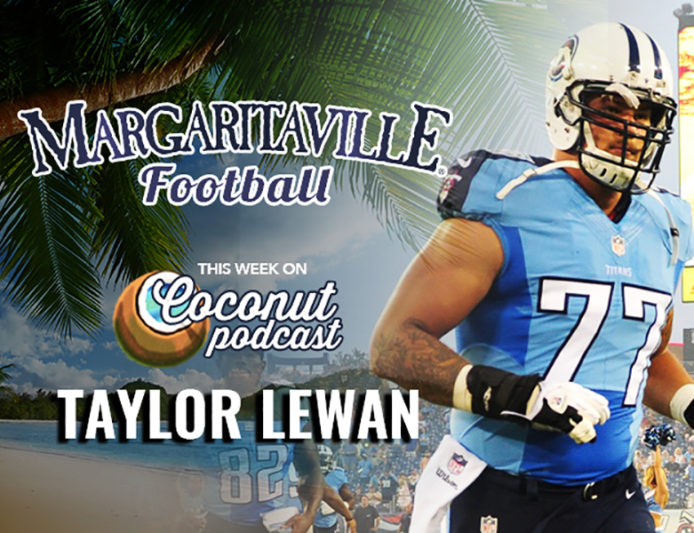 The Real Football Network is escaping to the Margaritaville state of mind for the Coconut Podcast called Margaritaville Football. As Jimmy Buffett’s tour traveled across the country this year, production coordinator Heikki Larsen sat down with football personalities to talk sports, music, living the Margaritaville lifestyle and more. Heikki’s guest this week is Taylor Lewan, the starting left tackle for the Tennessee Titans. Read more about their meeting here:

I was standing outside the Tennessee Titans practice facility watching the team practice. It was early summer, so the players going through OTA’s (Organized Team Activities). It looked like an army of players in shirts, shorts and helmets running around doing drills and there I stood holding a microphone, recording device and a Margaritaville Frozen Concoction Maker. I don’t know if it was the blender or the Margaritaville shirt that made the coaches and media skeptical.

The whistle blew and the team started jogging to the locker room and slowly but surely Taylor Lewan, the team’s 6’8” starting left 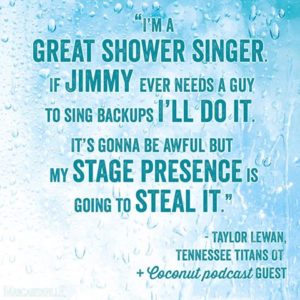 tackle, was walking my way. His head coach and fellow Coconut Podcast guest, Mike Mularkey, told me that Lewan would be the first one of his players we’d find in the Margaritaville state of mind. When he finally reached me on the sidelines, Taylor shook my hand with a smile and picked out a sunny spot to sit on the practice bleachers. I told him I wouldn’t take up much of his time because I knew he had a meeting soon, but he laughed saying, “That’s ok, I’ll stay here as long as you want. I don’t like meetings.”

The coaches said he was a free spirited guy and their description was on point. Taylor is animated and funny from the start – the guy could easily have his own radio show if he had the time. He grew up in Arizona, but wanted to rebel by going to college far away from home. So, he picked Michigan without taking winter into consideration, which he soon hated.

Pro football wasn’t on his radar when he first started playing in college. He was a nose tackle in high school and moved to offensive tackle at the University of Michigan. Taylor admits that offensive line players are the team within the team saying, “You don’t play offensive line to get that kind of credit. When you see a running back score or a quarterback throw a touchdown you get your own fuzzy feeling.” 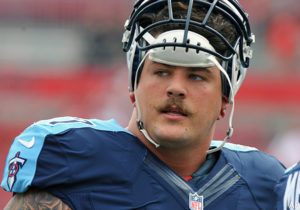 He rocks a stellar mustache (photo evidence to the right), admitting it has taken on a personality of its own. He’s not afraid to be caught singing. Whiskey seems to be his beverage of choice, which makes sense because he’s a big country music fan. However, he does drink margaritas, strawberry being his top choice. Taylor says he never shies away from a good time and if there’s a chance to sip on a margarita with salt at the beach, he’ll be there.

We closed out the interview with his perfect cheeseburger. It is by far the best burger recipe I’ve heard on the Coconut Podcast, so make sure you get the list of ingredients and listen here.