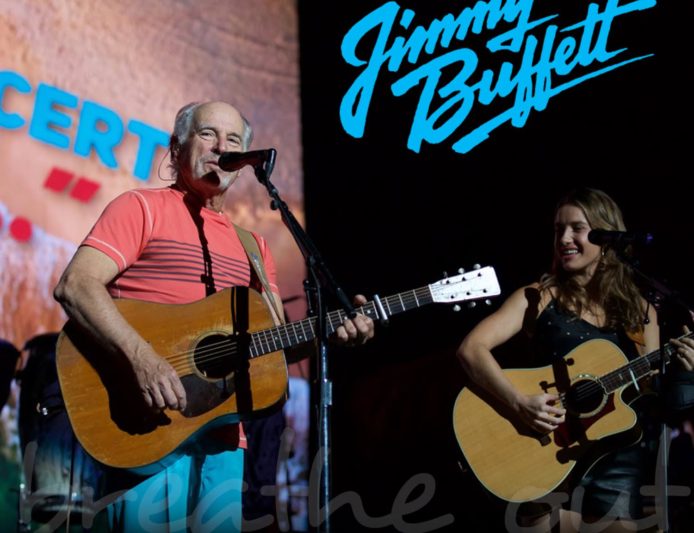 Jimmy Buffett’s duet of “Breathe In, Breathe Out, Move On” with indie singer/songwriter Caroline Jones is now available on iTunes, with proceeds benefiting Singing for Change and the non-profit’s ongoing hurricane relief efforts.

“Jimmy is authentic to his message through and through. Nowhere is that more evident than in the lyrics of “Breathe in, Breathe Out, Move On,” which is a song about the beauty and resilience of the human spirit in challenging times,” said Jones. “Performing it at the Trying to Reason Hurricane Benefit was a ‘goosebump’ moment for me. I’m so honored to share it with the world in hopes that it inspires others the way it has inspired me.”

The performance was recorded live at the hurricane benefit concert “Trying to Reason” in Tallahassee, Fla., last November, and brought together the iconic Buffett and Jones, whom Rolling Stone called “An ambitious, entrepreneurial guitar heroine primed to bring back the pop-country glory of the nineties.”

Caroline will next join Buffett at the following tour dates:

Recently ranked #2 on Billboard’s “15 Country Artists to Watch in 2018”, Caroline Jones is a singer, songwriter and multi-instrumentalist who is praised for single-handedly performing the guitar, banjo, harmonica, keys, and lap steel on her forthcoming album Bare Feet (2018). Throughout 2017, Caroline supported and shared the stage with Zac Brown Band on their Welcome Home Tour, performed alongside Jimmy Buffett, Kenny Chesney, and Toby Keith at the Trying to Reason… Hurricane Relief Concert, played Driftwood Festival, and more. Previously, the spirited vocalist toured hundreds of schools & universities nationwide – including underserved and charter schools with Stedman Graham – on The Heart is Smart School Tour, inspiring 150,000+ students with her performances and workshops to date.