“What the heck is pickleball?”

Despite it being the fastest growing sport in the country, those were my first words when I was told about the sport a year ago.

So, what is it?  Think of it as a form of tennis mashed with a form of ping-pong that fits right in the wheelhouse of pirates looking at 40. The court is half the size of a regulation tennis court, but the lines are painted like the lines on a ping-pong table.  The rules are similar to tennis with some slight modifications. 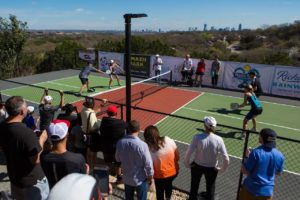 I won’t go into all the details, but suffice it to say, my favorite aspect of the game is that the crowd is allowed to be rowdy when they watch a match.  It’s a party with a sport showcased…not only as something everyone can play, but also as entertainment.  This makes it a perfect place for Margaritaville to plant its Fins Up flag.

Adding to the shared fun between Margaritaville and the sport, pickleball is also popular in the 55 and better community. So, last year after announcing Latitude Margaritaville, Margaritaville joined on as a sponsor of the Minto US Open Pickleball Championships in Naples, FL. This is why we got the call to attend a special event at South by Southwest in Austin, TX last month and I got to witness the sport in person for the first time. 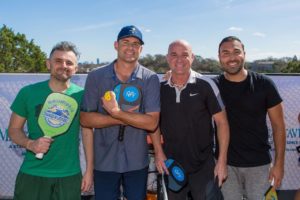 Here’s the scenario – Steve Kuhn, one of the Board of Directors for the Andy Roddick Foundation (ADF), has a house in Austin with a professional pickleball court in his backyard.  As part of the SXSW festivities, Steve wanted to hold something philanthropic connected with the sport gaining popularity across the country.  So what does Steve do?  He gets Andy and another Hall-of-Famer, Andre Agassi, to headline a fundraiser for their respective charities, ADF and Readvolution.

Two hundred VIPs donated their way into the event to watch the two battle it out on the pickleball court. Add in a Latitude Margaritaville sponsorship, LandShark and Margaritaville’s content team…and it’s a party!

We livestreamed the event and if you missed it, or want to watch again, check it out here.

Andy and Andre were good sports, playing with some hand picked attendees for charity.  I think the most enjoyable thing to see was the playing field being level.  You can’t play pickleball like you play tennis and watching Andy and Andre play for the first time you could see they were trying to get the hang of it.  Most importantly, they were having a lot of fun!

The crowd was into it, finding some amusement watching these former Grand Slam Champions duke it out on a smaller court while at the same time showing they were just as human as us.  I can see why the sport is rocketing off in popularity.  In fact, Latitude Margaritaville is in the process of building their very own pickleball courts to fit the demand from people who may be growing older, but not up and want to keep playing and having fun while staying active.  Not only that, Margaritaville just may have some new equipment just for the occasion. (Insert the photo with the Mville paddle, Roddick and Agassi here)

The Minto U.S. Open Pickleball Championships, this year powered by Margaritaville, will be held in Naples April 21-28.  Margaritaville will be there again, so if you’re looking for some party with your pickleball you’ll be in the right place.