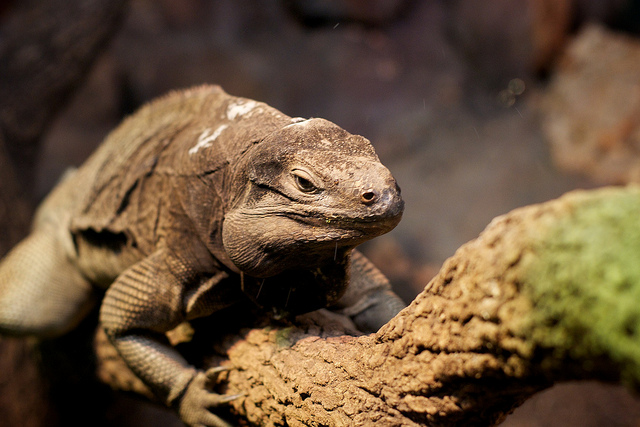 Out in the brush and rocky enclaves of Anegada you might just spot one of the rarest reptiles on the planet… if you’re lucky. The Anegada Iguana calls the little island home, and there’s only 300-400 of the critically endangered critters left. However, it wasn’t always like that.

Anegada Iguanas used to be found everywhere from Puerto Rico all the way to St. Thomas. That’s a serious amount of iguanas! But as people and their pets moved to the British Virgin Islands, feral cats and dogs proved to be unbeatable predators. We’d prefer not to go through that doggie door…

Though the population is tiny and found only on Anegada now, these iguanas are super easy to recognize. They can grow up to nearly six feet long (don’t worry, their tails make up over half their size) and are often seen in pairs since they mate for life. Aww. Gigantic lizards that know true love! How cool is that?

What makes these iguanas especially unique, though, is their coloring. The grown iguanas’ legs, tails, and spines are all a jolting hue of turquoise. Given how stunning the shade of blue is, you might even think their coloring matches the bright aqua waters surrounding the island! A perfect pair.

Since there are so few of these little dragons left, conservationists are working hard to make sure their numbers increase. The International Iguana Foundation’s serious (and effective) conservation efforts launched in 1997 have been protecting baby iguanas from their main predator, hungry feral cats, until they’re old enough to fend for themselves. Nearly 200 healthy young iguanas have been released into the wild thanks to the program and that number only continues to grow.

You can even go visit all of the protected baby iguanas on the island’s “Iguana Headstart Facility” run by the BVI National Park Trust. Some of the little ones are no more than the size of your finger, so prepare to have your heart melted by their quirky cuteness.

Thanks to all of the conversation efforts, maybe these stunning reptiles will roam all the BVIs again one day soon! We certainly hope so.

Off to see the lizard…!