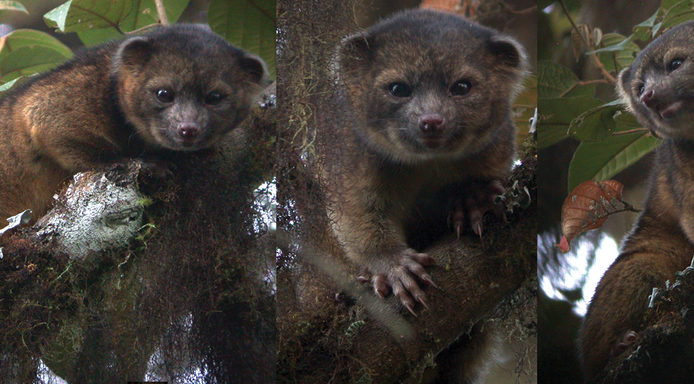 Ecuador has bragging rights to the cutest animal discovered in the last half century – the olinguito! This 2-pound member of the racoon family looks like the perfect combination of a kitten and a teddy bear.

Deep in the cloud forests of Ecuador, olinguitos have scampered through the trees undetected by people for, well, all of modern history. It wasn’t until 2013 that scientists working in the Andes suspected there might be a new species roaming the Americas.

What took them so long? 1) olinguitos are nocturnal; 2) they rarely descend from the trees, and 3) cloud forests are called cloud forests for a reason. These moist and mountainous regions are covered in a dense fog that made these night owls (er–night mammals?) hard to find. Scientists took this environment into account when they gave Olinguitos their Latin name, Bassaricyon neblina: neblina is Spanish for “fog.”

While these factors made olinguitos difficult to track down, they’ve been hiding in plain sight, too. One olinguito even lived in American zoos during the 1960s and 70s, and zookeepers were stumped by its refusal to socialize with other olingos. Makes a lot more sense now that we know that it was a totally different species. Olingo is the genus name. “Olinguito” literally means “little olingo.”

Researchers hope that the discovery of the olinguito will help protect the Ecuadorian cloud forests from deforestation. Surely still more (and maybe cuter!) animals are out there to be discovered in a region that has still not been completely explored.