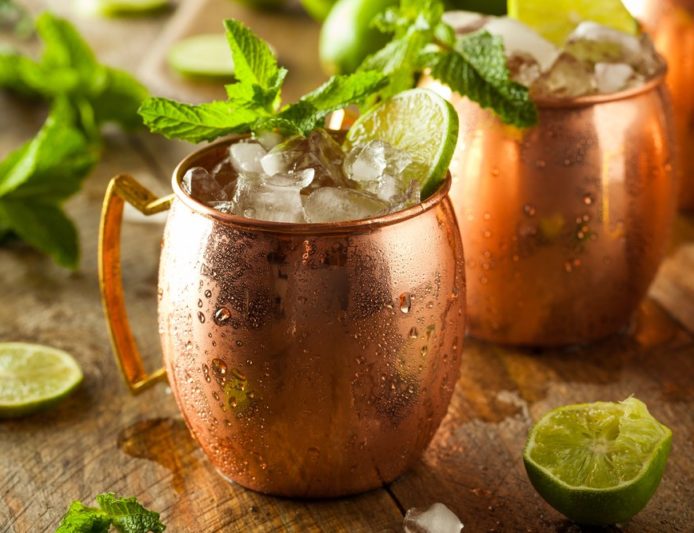 Ready to drink your way around the country? Stock your liquor cabinet, ’cause we’re featuring drinks in all 50 states, plus recipes so you can make them at home. Wisconsin gets to go first!

Wisconsin may be famous for its delish cheese, but there is way more to it than that. Some awesome things have come out of Wisconsin, like Orson Welles (the guy behind Citizen Kane) and Les Paul (the creator of amazing electric guitars). With over 15,000 lakes, Wisco has a ton of nature to explore and a special place in our hearts.

This state also knows how to party, with a wild college culture and some great small towns. Madison is consistently named one of the top college towns in the country. (Go Badgers!) It’s home to some of the best Bloody Marys, Old Fashioneds, and Moscow Mules around. Yum.

Moscow Mules in particular are having a moment, especially in Wisconsin! Here’s what you need to know… and don’t worry, we’ve got two recipes for you, too.

Also known as a vodka buck, the Moscow Mule is made with vodka, ginger beer, and lime juice. It comes in a copper mug with plenty of ice. So it tastes good and it looks cool, too.

The origins of this cocktail are a little bit blurry. The story starts in the 1940s when vodka was fairly unpopular. Then a vodka salesman, a ginger beer enthusiast, and a copper cup manufacturer all walked into a bar and the Moscow Mule was born… no, seriously.

As for the name, people associated vodka with Russia, so that explains “Moscow”. Nobody really knows about the “mule” part. Some people think it’s because of the strong kick from the ginger. A little mystery makes the drink taste even better, right?

Sound tasty? Shake one up at home. This recipe is for one—double it so you can cheers with a friend:

Mix the vodka and lime juice into a mug, like this one. Add plenty of ice cubes and the ginger beer, then stir to combine. Drop a lime wedge into the mug for garnish.

Take things south of the border with a Margaritaville twist on the classic: the Mexican Mule.

Make it just like the Moscow Mule, but sub in tequila for the vodka!

Get inspired to drink your way across America (without ever leaving your backyard) with Margaritaville’s 50 Drinks in 50 States series. My intel on this historic state can be considered expert as I have spent my entire life li

Get inspired to drink your way across America (without ever leaving your backyard) with Margaritaville’s 50 Drinks in 50 States series. I’ve heard New Jersey called the “armpit of America," and I guess, fact-wise, you might assume this. Afte

Get inspired to drink your way across America (without ever leaving your backyard) with Margaritaville’s 50 Drinks in 50 States series. As the gluten free craze (anyone who actually eats gluten-free would be angry that I just called it a craze)

Get inspired to drink your way across America (without ever leaving your backyard) with Margaritaville’s 50 Drinks in 50 States series. You might not think Ohio seems like the most “rock and roll” of states – maybe California or New York c

Get inspired to drink your way across America (without ever leaving your backyard) with Margaritaville’s 50 Drinks in 50 States series. So Iowa, it’s the only state name that starts with two vowels. That’s something. There’s also the Hawke

Get inspired to drink your way across America (without ever leaving your backyard) with Margaritaville’s 50 Drinks in 50 States series. The four seasons in Arkansas are Almost Summer, Summer, Still Summer, and Football. The sport is more than a