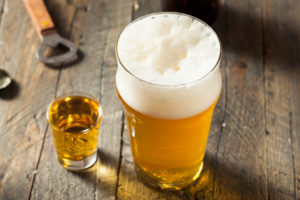 The boilermaker is probably the least complicated alcoholic drink you could make, aside from just cracking open a can of beer. The gist of the drink is that you drop a shot of whiskey into a cold pint of beer, and then drink the two together with the shot glass remaining in the glass as you drink.

There are two theories about why this popular drink came to be called a boilermaker, and further, how it became so beloved in Wyoming. The first theory is that the drink is an ode to the state’s most famous attraction: the Old Faithful Geyser. Geysers are essentially steam explosions, which erupt when boiling groundwater becomes hot enough to blast its way to the surface. Much in the same way that dropping a whiskey shot into a glass of cold beer causes bubbles to erupt in the glass.

Others Wyomians claim, however, that the drink is named after the workers (called boilermakers) who built steam locomotives in the 1800s. These guys quickly developed a post-work habit of ordering a beer and whiskey shot combo at the bar in order to ease the pain of a hard day’s work.

No matter the origin, the boilermaker is a sure-fire way to jump start your night. You can order it at the bar, or just whip it up at home. Although it’s not quite a recipe in the general sense (two ingredients, no mixing, no serious measuring)… we’re still showing you how to make it!

Alternative: You can also make a Boilermaker by pouring the whiskey shot directly into your pint. It’s not quite as theatrical, but it gets the job done!