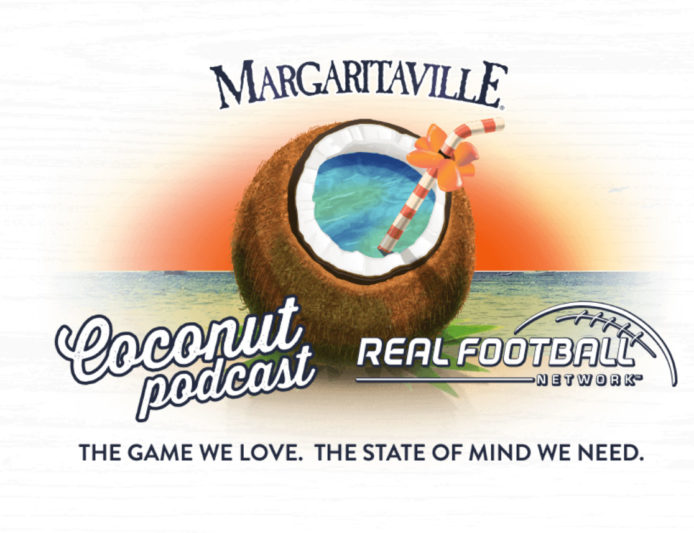 The Real Football Network is escaping to the Margaritaville state of mind for the Coconut Podcast called Margaritaville Football. As Jimmy Buffett’s tour traveled across the country this year, production coordinator Heikki Larsen sat down with football personalities to talk sports, music, living the Margaritaville lifestyle and more. Heikki’s guest this week is JJ Watt, a defensive end for the Houston Texans and 2012, 2014, & 2015 NFL Defensive Player of the Year. Read more about the night of the interview from Heikki himself:

I was walking in the rain backstage at the Cynthia Woods Pavilion in Houston, Texas. Jimmy Buffett was about one hour from taking the stage and I had to be at the backstage gate for my special Margaritaville Football guest. Charlie, my guest’s assistant, sent me a text to say they were 10 minutes away in a black F1 Ford pick up. I got to the gate and told the lady managing the backstage list that a black truck would be there soon and I needed it to be allowed to park by the tour buses. There was some push back until she asked me, “Well who is trying to park here?” I replied, “JJ Watt.” Her eyes were as big as saucers as she said, “He can park anywhere he wants!”

Charlie and JJ pulled up and I stood outside to direct them to their spot. I apologized for the rain and hurried them to the bus I share with my crewmates for the interview. JJ shook my hand and I felt like a child. The guy is enormous, and during the interview I would learn his heart is as big as he is.

I have to admit, I don’t remember much of the interview because I was filled with panic for most of it. It was 7:15 p.m. and JJ was due at the set for the Bing and Bong Show (Jimmy’s talk show he holds backstage live on SiriusXM Radio Margaritaville before every show) at 7:50 p.m. My Coconut Podcast interviews are usually 30 minutes and I wanted to make the most of this chance meeting with one of the NFL’s premier players. During the interview I kept checking the time and my cell to see if anyone from the production team was looking for me. I did my best, got to have some laughs with both JJ and Charlie and learned a lot about the reigning defensive player of the year…

Listen to the full interview to hear more about his favorite places to travel, cheeseburgers, and where his Margaritaville state of mind exists.

After 30+ minutes of fun conversation, I realize we’re late for the Bing and Bong Show, so we end the interview and as cool and calmly as I can, I walk JJ and Charlie to the Bing and Bong set as if everything is on schedule. And as if I planned it this way, we arrive just as Jimmy says on air that JJ Watt would beat a hurricane in a fight.

After the talk show, JB huddles up with JJ to ask him to come on stage to play percussion for Margaritaville. JJ smiles and says he’d love to…and as you can see in this clip, he plays a mean conga too. We set up two chairs for him and Charlie at the side of the stage and shortly before JJ’s Margaritaville cue he asks me if he can have a margarita. I told him I think we may have one around somewhere. I get JJ his drink as Jimmy calls him to the stage and the crowd goes crazy. 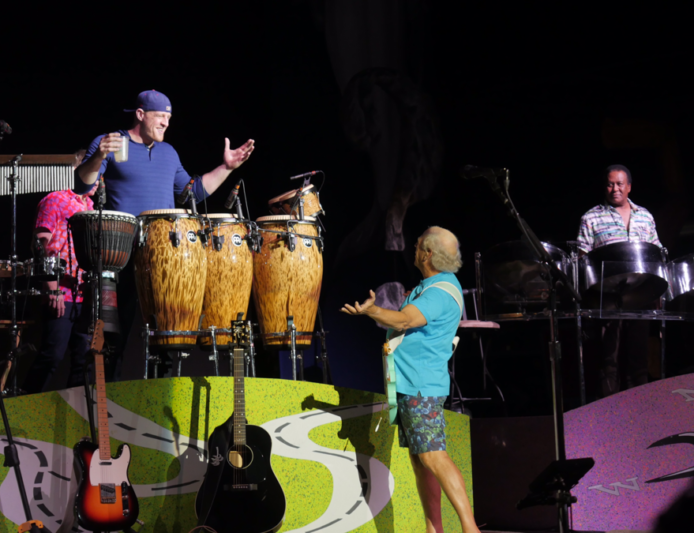 I love my job.

Listen to Heikki’s with JJ Watt on the Real Football Network.