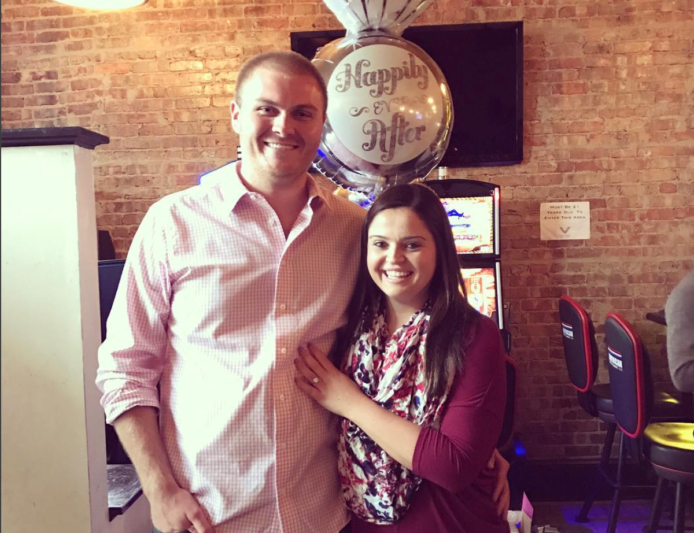 It’s hard to forget your first Jimmy Buffett concert. There are lots of expectations… tailgates, tequila, salt, lime, more tequila, and listening to the greatest music with 25,000 of your closest friends. But for one lucky couple, the Jimmy’s 2015 Workin’ N’ Playin’ Chicago show exceeded any expectations possible, that is, unless you expect to meet the love of your life in the Tinley Park Amphitheatre parking lot. Vicki Labuda and Justin Loukota will be meeting again, this time exchanging the grass skirts and Hawaiian shirts for a white dress and black tux, at the end of the aisle come July 2018! 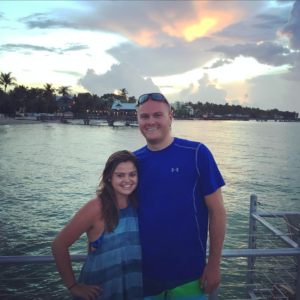 He was hanging with his hometown friends when a then-stranger bluntly approached him. “Her sister just came up to me and asked, ‘Are you a jerk?’” he chuckles reminiscing on meeting Vicki’s sister-in-law, Jess. “I told her ‘No,’ to which she just said ‘Okay, would you like to meet my sister?’” Justin happily agreed.

After the abrupt pick up and introduction, Justin left his usual tailgating and concert buddies to spend the evening with Vicki. “We ended up spending the entire concert together and just hanging out. The rest is history,” Justin explained.

Justin is proclaimed a hopeless romantic by his friends, and he fell hard for Vicki. The couple dated for the following year, and attended Jimmy’s I Don’t Know 2016 show in Chicago. After two Buffett concerts, a condo, tropical getaways, and many of life’s simplest joys shared together, Justin was ready to pop the question this past winter.

“I had it planned for two months that I was gonna do it on January 28th.” It would be a Saturday, and Justin wanted all his family and friends at a bar in their town called The Vault after. But that didn’t go as planned.

By Christmas Day, everyone in both families knew Justin was planning on popping the question the next month and decided to have a little fun with it. The family joined Justin in tricking Vicki to think he had no intentions of getting married soon by convincing her Justin was afraid to ask her father for permission. “Her brother and Jess were in on it, we all had her convinced.” Justin took the joke even further a week before the set proposal date by telling Vicki he hadn’t even thought about marriage. She was not happy. 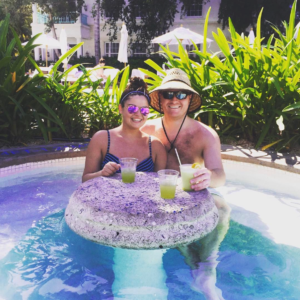 But on Thursday, January 26th, Justin had a good feeling. He got off work early that afternoon and decided the timing was perfect. If he asked tonight, it would be just them at home, a moment they could share together. He thought up a strategy fast. “Vicki was taking off her makeup and I told her I had to show her something on the computer.”

Justin always smiles remembering the interaction. “I responded ‘I can put the box away and we don’t have to do this right now.’” Vicki smiled and let him carry on. Justin got down on one knee and asked, with Vicki saying yes before he could even open the ring box.

The couple will be married in Justin’s hometown of Lemont, Illinois. The wedding is at Monte Belo Estates in July 2018.

Plans on Incorporating the Boss Man in on the Big Day

For the man that brought them together in the first place, Justin and Vicki plan to have a Margaritaville mindset for their marriage. When asked how Jimmy and Margaritaville will be incorporated into wedding events, Vicki and Justin replied happily, “Songs or signature drinks!” Vicki’s bridal shower will also be Margaritaville themed.

Justin and Vicki will have a mini honeymoon immediately after their wedding in Key West, Florida, what they consider their own Margaritaville. While down there, they are excited to see the new Margaritaville Resort near Mallory Square.

Justin and Vicki know it’s a pretty obvious one, but meeting each other.