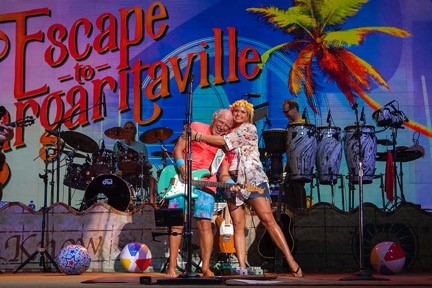 We were unloading trucks at 8 a.m. in St. Louis, getting ready to kick off the July leg of the tour, when our production office got a phone call.  Miranda Lambert was on her way from Nashville to see her very first Jimmy Buffett show.  I immediately sent word to Jimmy, and he texted back a few minutes later with a request to meet her before the show.  Before I even ate breakfast, the St. Louis show had already promised to reach a new level.

Quick story before we get to the show: I saw Miranda Lambert perform a few months ago in Nashville during the Merle Haggard tribute concert. She sang Haggard’s Misery and Gin.  I was unaware of the depth that made up the country star from Texas, but after hearing her sing that song, I was struck by not only her voice, but also by her ability to make such a sad song about heartbreak and bad habits sound beautiful.

Miss Lambert is an intriguing talent, as genuine as they come, and not just another pretty face on stage. There is something raw about her – complete with humility, feistiness, sass and charm.  And, all of this character is reflected in her voice. Her voice reminds me of walking into a bar where there’s a jukebox playing in the background and a hint of smoke in the air, giving an authentic filter to the scenery.

Miranda’s bus pulled in backstage around 3 p.m. She arrived with some friends from her camp, a group made up of Buffett virgins.

I’d be remiss if I left out a description of Miranda’s tour bus.  For starters, the name of the bus is Elvira due to Miranda’s love of 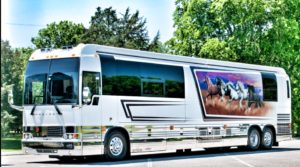 the Oakridge Boys.  It’s white and outside there are pinkish purple running lights on the top and bottom that glow at night.  They’re subtle and very cool.  The horses pictured on the side are horses that she owns and on the back it reads Giddy Up.  The artwork reminded me of those old school surf wagons and vans back in the ’70s.

Dustin, Miranda’s long time friend and tour bus driver, was kind enough to give me a tour of the inside. He casually opened the door and said, “Come on in! Say hi to Miranda.”  I hesitated, not wanting to intrude on her traveling home, but followed Dustin to the living room and was greeted by Miranda getting ready.  I smiled looking at the décor.  It was like a cross between Anthropolgie, Restoration Hardware and Annie Oakley.  It was perfectly Miranda Lambert!

Miranda told me she was taking some time this summer to check out other tours to understand what new technology was available and see how other crews and tours run. If there are any aspiring artists out there reading this, this is a pro move.  An artist that learns from other tours is bound to make an even better show for his or her fans.  After my tour I left Miranda and her friends alone while they set up there very own tailgate tent in front of the bus — they were there to do it right.

A few hours later I brought Miranda and her crew to meet Jimmy. Miranda was wearing a flower lei as a headband, feeling the vibe of the day and explained to Jimmy this was her first Buffett show. The dressing room was full of smiles and chatter as Jimmy asked Miranda to be a guest on The Bing and Bong Show and then join him on stage to sing Margaritaville. She looked a little surprised, this was after all a little vacation for her, but how can you say no to the king of good times?

The Bing and Bong Show was its usual organized chaos and Miranda went with the flow with ease.  You never know what Bing and Bong will bring you live and you have to roll with it depending on the day’s topic and viewer mail.  During the broadcast Miranda mentioned that Son of a Sailor was one of her favorite Buffett songs and with that, she instantly became one of the best Bing and Bong guests of the year.

After the crazy segment Miranda walked off set laughing and saying, “That was so much fun! Nothing made sense and I love it!”

As the Coral Reefer Band took the stage I asked Miranda to be stage left after Fins so she would be in place for her Margaritaville appearance.  Later, I would find her in place backstage a song earlier than asked (another pro move) with her good friend and backup singer, Gwen Sebastian.  As Fins came through the speakers I stood side of stage watching Miranda and Gwen copy the Coral Reeferettes’ dance moves while putting their fins up with the crowd.  They were having a blast!  And then, just as you’d expect, when Jimmy welcomed Miranda to stage the sold out show of 20,000 went crazy.  It was a thrill for Jimmy to have Miranda share the moment with him.

Miranda spent most of the night out in the crowd with her friends to get the real concert experience. After the show, Miranda and Gwen were the first ones backstage and they were smiling from ear to ear.  The first thing she said was that she loved how Jimmy ended the show with a solo acoustic number.  We see that every night, but it’s refreshing to see it again through another artist’s eyes and the connection they make with the overall performance.  Once the rest of her crew showed up we had some drinks and barbecue as we talked about the concert.

Miranda admitted she had to fight the urge to run around and gather as many flower leis as she could. Her overall consensus of the experience was more about the people at the show then the show itself.  She said, “You can be whoever you want to be at a Jimmy Buffett show.” In just one night, she got it. There is no fronting, no posing in Margaritaville.  You’re safe to be whoever you want, especially yourself, and that’s the best thing about truly escaping. 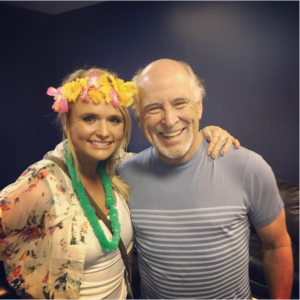 The Buffett Crew enjoyed having Miranda and her friends join us in St. Louis to experience what most of you already know about escaping to the Margaritaville state of mind. And now Jimmy is the one to blame for making another Parrothead for life.

Listen to the newest Margaritaville Podcast: Gypsies in the Palace edition to hear more about Miranda’s visit and other stories from the road.