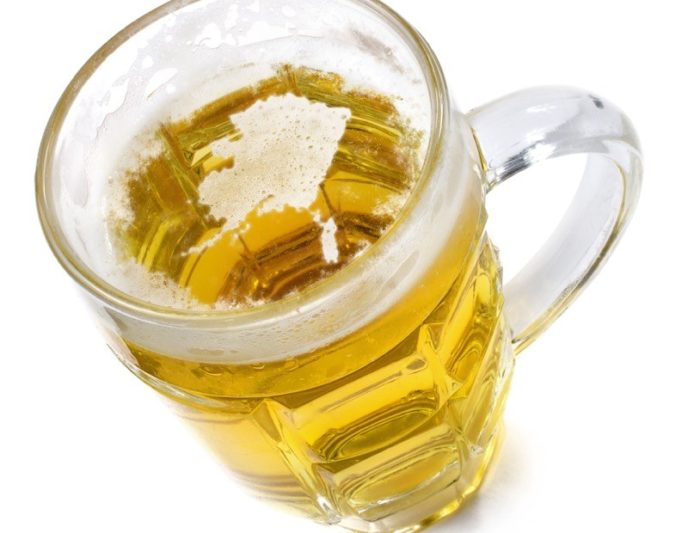 Sipping a neon colored cocktail in a tall sweating glass while idly twirling your paper umbrella and watching the sun slip below the pale blue horizon is certainly a palpable image, just not one that has anything to do with Alaska. The inhabitants of the 49th state are as down to earth as they come, and they say you can keep your paper umbrellas.

This is not to say there’s not a drink in their hands – there is, but it’s a beer. Alaska is 8th in the nation for breweries per capita, and the business is booming. These serious beer drinkers like to stay warm in the long, cold, dark winters under their beer blankets, and the 5 AM “last call” certainly doesn’t hurt. Though the Alaska Amber from the Alaska Brewery and Bottling Company (Juneau) is the unofficial brew of the state, the competition is stiff and the scene is ever evolving.

Craft and microbrews have created a beer scene as intricately detailed as a trip to the Napa Valley wineries. The variety of colors, the depth of flavors, and the use of both traditional and non-traditional brewing techniques make it a consumer driven marketplace where the idea of simply choosing between a pilsner and a lager has become completely antiquated.

In Alaska, the desire to create something great ties in closely with the unperturbed, pristine, wild of the environment. “As Alaskans, we pride ourselves on living with the land, not on it. In that spirit, Alaskan has relied on innovation to grow as a company, while doing everything we can to avoid adversely affecting the local environment we call home. We were the first craft brewery in the country to install a CO2 recovery system and a mash filter press, we run our steam boiler on the spent grain left over after the brewing process, and we created the Coastal CODE, a nonprofit ocean health initiative. All in an effort to maintain a commitment to environmental stewardship while providing a true “taste of Alaska” to our fans.” (https://alaskanbeer.com/)

EDITORS NOTE: LandShark is always our first choice, but when in Rome, or, in this case Juneau, we may sip on an Alaskan Amber. Otherwise, Let’s Beach!